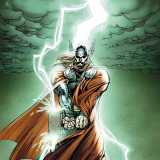 Everytime I think of the Tea Party... I think of Men in White Sheets, Burning Crosses, and the statement : Make A Stand... Join The Klan ! White Powah !

No... I don't like the Tea Party and there are definetly people like that in the party, but the majority are not racist or want to see the government be completely destroyed. There are more ethnic and religious groups than just caucasian and christians in the Tea Party, but they are for sure in the minority of the whole Tea Party movement. Most are just misleaded people that truely have a ideal belief in smaller government, balanced budget, and following the constitution. None of those things are bad in it's self but the party is lead by nuts and corrupt people wanting to line their pockets or actually overthrow the government...

Well you have a Party that was founded by corrupt greedy rich aholes that use fear, propaganda, and hate to denounce anything left leaning or pro government, be it true or in most cases complete bs. I am for a smaller government in many places and for getting rid of the corruption in Washington which is in both democrat and republican elected officials. The problem is that many of the louder voices in this Tea Party and many of it's figureheads are just as corrupt or worse than what was in government before they got into it... Many of these supporters are more aching to anarchist than actual conservatives and while they blame the federal government for all the problems going on they don't even notice that they are just causing as much harm if not more and those that believe there should be no government do not have a full understanding of the reprecussion it would cause for the majority of USA citizens... Many of these conservitive states that have a big Tea Party group would actually be the most damaged by having no federal government since the fed give more money to that state than the State gives back so that State would be bankrupt in no time... People need to fix their own dam state before they blame the federal government on things that are not even their fault. Texas is one of the major exceptions though since it can sustain it's self more than any other state and pays about twice into each dollar that comes in from the fed.

Those that say government is bad and are elected in to government and just keep spouting that mantra and believe it are just as much the problem for they are purposely assuring the goverment to fail instead of actually fixing the problems...

Republicans say they will pass a budget IF and only IF it includes de-funding Obama care. The only reason they won't do it is strictly because of Obama Care. That sounds like BLACKMAIL. They couldn't stop it from becoming law. They got their feelings hurt and want to react like whining children while hurting thousands of Americans they are supposed to serve.

In congress so far many Republicans in House and Senate have tried to repeal obamacare 42 times since it was placed into law.

I personally disagree with you sir. Democrats are ruining the country.

Both Democrats and Republican in Congress are ruining the country because of special interest groups, greed, corruption, and no actual care for the American peoples interest. They may spout different things, but behind doors they are all the same and it is just getting worse and worse. People are more divided than ever in this country and some in government and in corporate want it that way because it blinds both sides to the truth and instead of uniting against this corruption and bs we are fighting among ourselves. Also the majority of American don't know what is right for our country and are complete idiots that will only listen to one view and never even check the facts unless it is on a article, document, channel, or site that is biased towards one viewpoint.

I don't agree with many things in the Affordable Cae Act and would like to see it revamped or replaced with something else. To have the government shut down because some hard rightwing tea party people won't budge unless they have Obamacare defunded is just childish and an abuse of power that only hurts the American people. Obamcare was passed in congress, supreme court said it was ok, and it's a law so to try and hold up the government budget and the cost of around 200 million dollars a day with the shutdown and people not woring is just asinine. If they want to defund it they should be smarter about it and try to get the senate in the next elections and do it then... Both parties are acting like children, but at this moment if this goes on longer it will hurt the Republican party more and make it more divided than it already is.

The first thing to go in a Government shutdown should always be congress paychecks and their free healthcare. They failed us so they are the ones that deserved to be punished...

They have some chemistry going on and some big things they can relate with each other, but the major flaw with such a relationship is that Wonder Woman is not above killing her Enemies or going against Gov't where Superman when written mostly is against killing and mostly will never go against gov't well in the case of the USA.

this way he'd be more of a DARK Knight, don't you agree?

why did they make him white?

AS it has been stated many times already he was created during a time no one but whites where that rich and that the society back then treated all non-white races as second class. There would be a beter chance of an Asian American, jewish, catholic Batman back then in social ranking than a black Batman... I am not saying it is fair or right because it is not, but if they changed a characters race/ethnicity I feel that is one of the lowest ways to create or bridge the gap of equality in my opinion. There should be characters with origin stories and development that deal with that from the start instead of copy/paste another story with some altered detail. Maybe give a new solo for John Stewart, Cyborg, Steel, Static Shock, Vixen, Black Panther, Storm, Luke Cage, Blade, and War Machine to name a few. If they get good writers and stories then they can becomre more popular in the comic culture and above. Blade in the movies for the first two films was making strides and there where talks if say shit went right to start a Blank Panther movie next, but that fell through the cracks... Let's not even mention the horrible Steel movie with Shaquille O'Neal...

@odinforce: How is Batman better than Karate Kid when he has better feats in beating tougher foes without gadgets and just his skills in martial arts? Also when has Bruce chop a mountain in half like Karate Kid? Just noticed you said Batman 1 million... my bad. Also I reply to the wrong person...

His Sharingan is not a jutsu so he can use that as in to copy Daredevil and predict his moves. He also has like Daredevil heighten sense maybe not to the extreme of hearing as Daredevil, but his sense of smell and etc are above human. He also is well able to adapt to any environment in no time and use what ever is around to his advantage. He also still would have the ability to stand on walls and ceilings for pure chakra is a natural thing in his world and to an extent in marvel universe as well for Iron Fist is a normal human that can use a version of chakra as an example.

I think his religion will hurt him more than help him for many protestant, chatholic, and black people that have read the book of Mormon... My reason for believing this is many of the other major christian orginizations like the Catholic and Protestant don't believe Mormons to be part of the christian group and usually look at them as liars of twisting Jesus and etc. Heck it took ages for a Catholic person to be president for the Protestant push back and both of them would rather have one of them instead of a Mormon. If you read the book of Mormon then you know why a black person would on average not vote for one... I have nothing against Mormons and there have been many great people that are Mormons, but for those more extreme religious or anti-religious groups they will not vote for him most likely.

Also people that type and preach that words or hate speechs cant hurt you need to realize that is pure BS. Look through history and see that words are the most effective way to bring pain and torment to humans and can cause physical harms by spreading lies and hate. Just because they do not effect you as you may believe it still effects millions and only just a handful can cause hell on earth if unchecked. I am not saying to go to extreme censorship for I am against forms of political correctness that have to do with word banning, but im for ending hate speechs of any sort and to any who support it should look in the mirror and put yourself in the victims place and look at it in another persons perspective just for a few minutes...