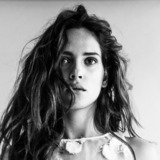 Valentina Abreu was born in Santos to Davi and Marcela Abreu, two practicioners of Spiritism. Her father died during her first years and she was raised by her mother, receiving more love from her than most receive from two parents. Very early on in her life, Valentina became an initiate due to her great affinity for the religion. She learned much from her sole parent, the great-great-granddaughter of a famed european medium, despite her mother lacking the talent herself.

Her mother would emigrate to the United States during her teen years for cancer treatment, which turned out to be moot. Valentina was then raised in a federal orphanage but, despite being a quiet girl, she was never really alone. Psychological reports described her as a girl with a "creative imagination" and many "imaginary friends" she talked to. Ritalin was prescribed to correct this.

Valentina ran away from the orphanage before her 17th birthday and started using her talents as a fortune teller somewhere in Gothic City.

Mediumship can be defined as the practice of communicating with the dead. Valentina prefers her own higher-sounding version, to serve as an intermediary between the worlds of the living and the dead

Valentina's affinity for this role allows her to see, hear, and touch spirits just like a living, breathing man. This means she can pass on messages from beyond the grave either by relaying the words she hears or by channeling a spirit.

Mediums have lost their credibility. There were so many cases of deception that one can do nothing but laugh when the subject is brought up in a discussion. However, Valentina is far from a fraud.

There are many varied forms of mediumship. Kardec enumerated up to 73 forms in his writings. One such form is the channeling of spirits. Usually, one's soul will leave their body so that another may enter it temporarily. Valentina, however, is an unusual case.

Rather than leave her body, she shares it with another spirit while retaining control. The applications for such a gift are numerous. For one, she can search through a spirit's memories for knowledge that she otherwise would not have. During their connection, her understanding in any area of learning is expanded should the soul's mastery surpass her own. This could include the writing of a deceased playwright, the bobbing and weaving of a famed boxer, or even the magic of another occultist, the latter being what grants her the most power.

An aura is an emanation of the human soul, varying in color from one man to another. Beyond the simple usefulness of being capable of locating others, it serves other purposes. For one, Valentina can potentially know the strength of mystical or supernatural beings.

It also has medicinal applications, but she has started learning them only recently.

The Colar dos Orixás, or Necklace of the Orishas, is a family heirloom belonging to Valentina. It is fashioned from silver and black onyx, glowing blue when it is used. It once belonged to her mother, who didn't know of the necklace's capabilities. As far as she knows, Manuel Fonseca, her sixth great-grandfather, was the one who obtained it when he explored Western Africa.

The necklace holds the ability to store different spirits within it. Some spirits she deems useful are consequently 'owned' by her through the artifact.

Valentina's trailer, lovingly nicknamed "Samson," is her home and only mode of transportation at the current time. It really is a cozy place to be if you ignore the holes on the floorboard.

Samson doubles as a place of business. People go there in order to speak to their loved ones. Either that or for "guidance," where their likely to just hear some fortune cookie wisdom, as Valentina calls it.

The trailer holds all of her most prized possessions, which really aren't much. Among them are a number of books, medieval weapons, and ritual tools.