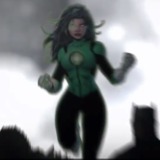 Vai, also known as Samantha Xanders, is the daughter of Gale Xanders/Xae. She was artificially created in a lab (because Xae can't have children naturally with humans) via artificial insemination using male human DNA from a bank. As a half human crossbreed Vai initially aged at the same pace as Human children but around her 20h birthday her other DNA slowed the aging process down considerably to match her much longer life span. By the time of CVbU Vai is 24 years old but will now age at a much slower rate more akin to Xae's own aging process.

Physically most of Vai's features are similar to her mother's own race. She is a limited shape shifter, limited telepath and has Xae's strength, speed and agility as well as alternate form and wings. What Vai gets from her human DNA is limited but she is more capable of interaction with humans, especially having secretly grown up in a human world. Xae inserted Vai into the human education system but sent her to the best private schools money could buy. Here Vai grew up among Humans and easily assimilated to their culture and beliefs, though her natural instincts give her her mother's views on male/female interactions.

Vai has grown up seeing an increasingly distressed world and in her youthful desire to improve her world she set out to travel and try to find solutions to various world problems...and a way to become a hero like her mother. Unlike her mother Vai has no inclination towards developing technology so she had to go a different route. Over time she eventually ended up in contact with Luna Hawk who now holds the various power rings that used to belong to Solar Hawk before her death. As ever the rings choose their bearers and a Green Lantern ring chose Vai.

Vai now ventures out into the world to create her own heroic legacy, occasionally returning home to spend time with her mother and seek advice on how best to serve the world.