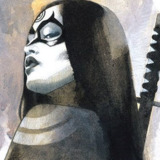 She walked along the paths swaying her thighs with unbelievable confidence, if not obnoxious disdain. Untouchable. She moved as if silently wishing Hirohito's trained security would catch up to her. Would even dare attempt to impede her escape. When the irruption happened and the screams and disorientation broke out, she paused in her tracks. Then slowly and deliberately looked back over her shoulder placing a fingernail between her brightly colored lips. Its taunting visual explicitness was already evident, yet the Urban Ronin was nothing if not theatrical. In addition to the aforementioned barb, she snapped her head back offering a sexually loaded side-eye and highlighted hip extension.

Of course it ignited an immediate pursuit. It was what she had been craving all along.

After all, why should Val get to have all the murderous fun huh?

In the form of an experienced runner she stylishly dashed, kicking her heels off through the sheer explosive force of her strides, leaving them to tumble across the pathway in her wake.

Bullets narrowly whizzed past her head but she never broke from her form. Arms knifing through the air. Legs galloping like an unleashed stallion. Diving hands first to catch the hood of a parked car, bringing her legs quickly underneath to cat-walk over the obstruction. "GET THE (*&^ OUT!" she snarled. Yanking the driver's side door open and jerking the civilian out into the street.

With a simple push-pull action of the vehicles H-pattern sequential shifter, the tires lit up and the car briefly fish-tailed before blasting off. Brazenly breezing through the immediate traffic light and then power-sliding in a delayed 180 up and onto the nearest freeway ramp. And just like that, she was gone.

Akiyama Hirohito was an honorable man, all things considered. Dedicated to the disciplined indoctrination of traditions. Which meant he took care of his own. Which meant, he loved his family. Sadly this also meant his love could be exploited. Manipulated. Ransomed or perverted.

So it was of little surprise that the Last Memory had zeroed in on this particular avenue in which to lay her trap. Love had been systematically removed from her emotional capacity with surgical precision. The ability to form lasting connections had been reversed engineered and the very thought caused her physical discomfort. Most would call it jealously. And it was doubtful she would ever argue that fact.

She had carefully organized a field trip for one of the district's private schools. A school the granddaughters of the beloved Hirohito Hiro just happened to be enrolled in. It hadn't been difficult, but had required Nobumasa play a convincing part. She didnt mind. She had always loved to dress up, and make believe she was someone else.

#3  Edited By Urban_Ronin
3 years ago

#5  Edited By Urban_Ronin
3 years ago

The aggravation of having to violently react to the lunge with physical exertion fueled the Sutorei (stray in japanese) Shinobi's counter. Quickly contorting her gait sideways and dropping down to a knee, she sought to maneuver out of the way while reaching up with her good arm to snare the determined assassin's head with an under and over grapple around the neck.

Hopefully using Valentina's momentum in aiding the attempted snapmare. But fumbled the execution. Most likely resulting in both of them crashing into each, and then the floor. "STUBBORN...STAY DOWN!" The Ronin raged. Grasping at her shoulder as the all consuming pain rifled through her entire body. "We no good to anyone if bleed out here and now!"With what little energy she had left, she scurried to the wall and rested her back against it. Too exhausted to go for the door.

Too tired to help her poison put the viscous viper to sleep. Her foolish ploys and games having drastically backfired, she had little recourse now but to text the Voice Unheard and alert him as to her...misstep. Pulling a burner from the heap of clothes on the floor, she sent the message.

#7  Edited By Urban_Ronin
3 years ago

#9  Edited By Urban_Ronin
3 years ago

The forceful shove sent the Sinister Spider of the San'Vun Syndicate backwards, end over end, into an eventual somersault. And there she remained with a solitary knee planted on the floor for balance. Her hair now draped down obscuring her face, her expressions and tells. But only briefly, as she soon whipped her head back and left it arched with idiosyncratic poise. Yet another odd and unsettling scene, her apparent disregard for the weapon protruding from her shoulder only serving to further illustrate an unhinged mind.

"I don't know what your game is"

"Good." she smiled. "Cause I do not play game. Game have rules. I burn board, brake pieces, cheat player. Make new game. We make together, yes?" Grimacing as she finally removed the bloody sai. With her hands raised indicating no harm, physically signalling it was over, she calmly placed one over the bleeding wound making sure her palm was sufficiently covered in blood before removing it.

With a nod towards the Shadowrunner's leg, the indication being to follow suit, she offered her hand in partnership. "San'Vuns. They have pact. Syndicate. They have pact. Yakuza. Pact. Their pacts are strong...ours can be stronger." Only in the deranged mind of the Urban Ronin could such a violent and unexpected act be considered an honorary prelude to partnership. But never the less, here, it, was.