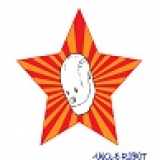 I'm a 37 year old, living in Columbia, MO. By day I'm a financial advisor. By night I'm the least sexy member of Uncle Robot Presents. In other words, I'm the business end of a pretty cool retro sci-fi webcomic team.

Uncle Robot Presents is a comic art production company featuring the work of Martin Pope. "Vorto the Pirate" is two-fisted adventure on the high seas of space.

Vorto is an adventure strip centered around the notorious space-pirate, Emile Vorto, his companions, and the empire which has enslaved him. Vorto battles the pilots of the deadly Scorpio Squadron to win his freedom and that of the peoples of Orgom. This retro sci-fi webcomic updates weekly on Sundays.