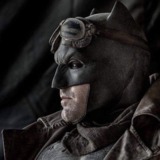 This is my second blog so forgive me if I suck :P. Also if this has been done before I'm sorry.

If you haven't read Justice League 25 the Forever Evil prepare cause SPOILER ALERT.

BATMAN MAY BE THE ONLY LEAGUER WHO DOESN'T HAVE A CRIME SYNDICATE COUNTER PART, IN THE NEW 52? hmmm So we know that Batman has an alternate universe counterpart known as Owl-Man, whose real name is Thomas Wayne. But this is a completely altered canon so things in Pre-52 don't seem to apply here. In Justice League 25 we got a look at Owl-Man's (aka Thomas Wayne Jr.) history and with he and his family we see not 2, not 3, but 4 family members of the Wayne family.

"This is strange". You ask. "This has never happened before". You say. You're absolutely right but need I remind you this is a completely different canon of the DC you came so accustom to. And I you remember the beginning of Snyder's Batman run, Batman was fending off the Court of Owls and the Talons. Batman fought their leader Lincoln March. March revealed to Bruce that he was his mentally unstable brother named Thomas Wayne Jr, whom after there parents died was forgotten.

This may or may not be true, it was never confirmed. However during flashbacks in JL 25 you can see Thomas Wayne Jr with a younger brother named Bruce. Now on this earth Bruce, died along with his no good crime boss parents, by the the hands of young Thomas Wayne Jr. On our earth however the young Bruce lived while his brother "rotting in a special hospital". Now with this knowledge in mind, is it possible that the young Thomas Wayne Jr is not a counterpart to Bruce Wayne but a counter part to the young Lincoln March? Now is it possible that since our worlds Lincoln March became there worlds Owl-Man, that our worlds Bruce Wayne lived and there's died in the alley last night? Maybe maybe not, I doubt this is something that will be of importance to the future stories just some thing I thought would be fun digging into.

What are your thoughts on the matter? More importantly did you like this blog? Hope you enjoyed.