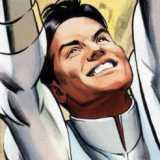 Excuse the thread alignments. I had it set well enough, but seems the forum took away the styling.

So, after stopping halfway through the Justice League trailer, I have to ask: What's the deal with DC and their unwillingness to have accurate portrayal of their characters? I mean look at Marvel, aside from Nick Fury, all the characters have been more or less accurate appearances of the way they look in the comics. (Movies, don't know about the tv series), but then DC goes off the deep end for some reason, with some subtle dislike for blond/blue-eyed characters?

Now look at the comic:

Then we have Barry Allen, which is a mindblowing 'f-u' to the readers if I ever saw one:

Seriously, how does blond, blue eyed Barry Allen not transfer to the movie universe? It's not just the movie, but the tv show as well:

Am I the only one that wants to see an accurate depiction of the characters I'm reading?

But yes, I'm serious. I feel like I'm the only reader that's continuously blown away by how well Marvel Studios depicts their MCU characters in relation to the comics, but continuously cringe at how badly DC is portraying their characters. Can someone please tell me what the deal is? DC makes the trinity look just like the comic, but fail at the rest of the Justice League (aside from Cyborg, I guess)? If this is the wrong section, then a mod can kindly move this thread. Also, I still won't forgive DC for the travesty that is Man of Steel.

So I'm looking forward to the post-Rebirth Titans and Teen Titans, but I had given up on the series when they muddled up with the whole 'son of Superman' Superboy replacing the real Superboy (not to say, I'm pissed that Kon-El won't ever be coming back). So I was wondering what's all happened since that storyarc until now? When did Damian replace Tim as leader?

Damian hasn't replaced Tim as leader. The actual teen titans are going to be separated (they have problems with the law) and Damian is going to reunite Raven and Beast Boy.

Seems like Starfire is going to be the leader and the new Superboy isn't going to join.

Seems to me the Raven, BB, Starfire team is the real Teen Titans. Don't get me wrong, I loved pre-New 52 Tim Drake-led Teen TItans, but this New 52 one has been killing me. So you said, new Superboy. Does that mean, the "evil" Superboy ("son of Supes" is still active?

So I'm looking forward to the post-Rebirth Titans and Teen Titans, but I had given up on the series when they muddled up with the whole 'son of Superman' Superboy replacing the real Superboy (not to say, I'm pissed that Kon-El won't ever be coming back). So I was wondering what's all happened since that storyarc until now? When did Damian replace Tim as leader?

I'll only see it for Batman, possibly Wonder Woman. But they ruined Superman for me with the last film.

Kenny Ackerman - Put alias as Kenny the Ripper, but keep Ackerman as his name.

Harley looks much like her modern self, I'd prefer Deadshot with his signature mask, Croc looks close enough, I barely recognized Captain Boomerang, and Katana looks just like her modern self! Only reason I know of El Diablo is, because I read through the first Suicide Squad series of the New 52 launch, though not the second. I don't know the rest of 'em.

His hair shouldn't be combed, but "wild". He shouldn't have tattoos, because he is the representation of insanity. He doesn't need tattoos to display his message. All in all, I don't much about Leto, but I always though Franco would have a good chance at the role. :/