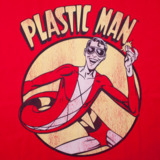 Young Justice, whenever she showed up you knew the episodes got real. Also, where was she in the DCAU? I really don't remember her unless she was in the background in JLU.

I love how passionate the writers feel about Rebirth, and definitely excited for this. I guess I now have to go and pick up those Teen Titan books now.

DCAU for Batgirl. Totally forgot she was in YJ.

@ganon15: For the Time Drake Robin? I'd have to go Young Justice just because I haven't seen him in the DCAU yet.

I think that the biggest problem like what many people have said is the fact that they tried to reboot. While it was fine for newer fans, I can see how it could totally turn off older fans, and with the DC universe dissected into the Bat-family, the Super-family, the YA-Characters, and so on only made the universe feel fractured. At first I actually didn't mind that since if I was reading primarily Batman books I wouldn't have a big problem with the continuity, but say if I read a JL book, or something else that wasn't in the Bat-family catalog then it just felt odd and strange. Almost like each section was their own mini universe.

Another big thing that I didn't like about the New 52 is that DC didn't allow their books to breathe. On one hand each mini universe was having their own constants of events. Take Batman, his sister titles had to deal with the Court of Owls, Death of the Family, Eternal, Zero Year (I think?), Batman and Robin Eternal, etc. With each mini universe having so many mini events that affected only their titles it would feel strange whenever I read comics that put two mini universes together. That, and DC would cancel a book really easily. Some series like Static Shock, Mister Terrific, and I believe Amythist all had less than 10 issues before being canceled. DC didn't even allow them a chance to get out of their ruts and improve, and in that I think it turned off more comic fans because one of the things that are so comics and not anything else is the number of issues I title can have and how certain runs of long series can give flavor and balance to a title. Say the 1997 run of JLA. That lasted over a hundred issues, but nobody is going to love all 100+ issues, and that ebb and flow of quality is actually very attractive in a title (at least for me) because it can show a character at their worst and their best and all between. The fact that most N52 characters wouldn't be treated that way can create a stigma in the eye of fans.

Overall I am a fan of the N52. I'd say for everything they did wrong they had at least something redeeming to balance it out. I'm enjoying going back into the DC catalog and finding out what their stories were like before the N52, and I'm sure more newer fans are doing the same thing, or finding it out through Rebirth since it's going to start mixing the old flavor with the new. All in all I think N52 was ultimately a failure even though there's a lot of it I like, but at the same time I think DC needed this to really understand what makes them DC while also setting up a new road for them after the Brightest Day era.

That's definitely an interesting way of looking at things. I never thought about numerous characters from pre-flashpoint, and it does make sense that Wally would have a better chance at clue finding with them, but somehow I doubt that will happen, or at least will happen soon. DC has constantly said that Rebirth will be a slow reveal, I'm thinking at least three years if not five until we know 70% of what's up, so I'm thinking if Wally ever does track down the pre-flashpoint characters then it'd be after his stint with the Titans. Or, maybe that's what the first big event post Rebirth will be after the first year or so and Wally meets up with everyone to find the next clue from Rebirth. Really interesting ways to look at these titles thinking of it like that.

@ganon15: So I missed the second page, but it wasn't years ago.

Only if King writes him. Out of the new Batman comic the only thing I love about it is his take on Alfred, but only if it's a mini.