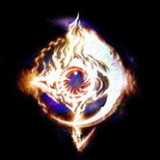 Twilight nods and steps outside the cave. "Wow" he thinks, "finally, after so long being alone, I've found some friends. They do seem a bit sinister, but that's probably just because of their strange powers. I'm sure they wouldn't do anything dangerous towards me." He stands there at the entrance, enjoying the sunlight and watching the tower.

Twilight shrugs and then sticks his tongue out at Abaddon.

Not wanting to be left out, Twilight writes on the ground "I go through stuff. Usually."

Giving a quick nod, Twilight follows Fourpower towards the cave he had seen earlier.

A little embarrassed by all the attention, Twilight looks down at the ground. Noticing it's just dirt, he gets another idea and, bending down, writes "Twilight" in the dirt with an arrow pointing towards him.

Twilight smiles at the person addressing him and gives a little wave. However, that was about the extent of how much he could communicate to him. Thinking quickly, Twilight points at his throat and then makes an x with his arms in front of him.

No clue. I just hit the reply button at the end of the last post. Is there some other way to do it?

After calming down a bit, Twilight opens his eyes and begins to survey the land. He notices a cave off to his left and a large tower off in the distance, with some activity going on around it. Having lived in a forest for longer than he can remember, the endless amount of grass was still a bit intimidating, although if he thought of it as simply a very large clearing like he found sometimes in the forests, he might be able to wrap his mind around the concept. Noticing two beings by the cave, he gathers up his courage and begins to make his way towards them. Maybe they would have some answers.

Twilight awoke and stretched. At 5'10 with curly brown hair, green eyes, and fairly average build, he was fairly normal looking. Except for the whole being transparent issue, although he was used to it and hardly ever thought of it anymore. He looks around, blinks, looks around some more, and then lets out a silent scream. He has never seen such an emptiness in a long long time. The grass, at least, is a bit familiar, and he focuses on that to quell his panic. Slowly, he looks up. Everything's still the same, but at least he can pick out some features. Looking behind, he notices a great tree and heaves a huge sigh of relief. "That's more like it!" he thinks, and begins making his way over towards it. Settling down against it, he closes his eyes and begins to feel his panic dissipating.

Maybe Combat Awareness or Leadership instead of Strategist? (Strategery?)