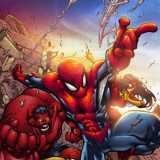 DCEU Superman: Unneeded, and done in a stupid manner. Couldn't wonder woman just throw the spear. Heck, couldn't superman? It doesn't help matters that we all know that Superman was going to be in JL, so what was even the point?

Now I'd say their about tied. Maybe Damien slight edge because of the awesomeness of Super Sons comic

Secret Wars 2015 was amazing. It's legacy is slightly soured because it wasn't the universe soft reboot that they billed it as, and almost has very little long lasting ramifications. Ultimately it served only 2 purposes

1). To bring over a select few elements from the Ultimate Universe

2). To give bad writers like Dan Slott and Bendis a free time skip to force their stories in the direction they wanted without doing any of the work i.e. Peter is the new tony stark without any story of how he got to that point. Tony is poorer for virtually no reason.

Secret War 2015 itself though was on of the most epic events I ever read. Beautifully drawn and a powerful story.

I honestly enjoyed this.

I enjoy the story but this attack on Captain America's legacy is UNNECESSARY. It didn't have to be done to make this story work.

This is the reason why marvel comics has received so much hate in recent years.

There is a difference between Deconstructing a character to build him back up stronger. And ruining a characters legacy with no end game. Marvel doesn't know the difference. This is essentially Captain America's One More Day. This is close to when marvel tried to make Ben Reilly the true spider-man. Except this time, the threads are so dug in, even after this is over, Cap's core character is destroyed. What a disrespectful way to depict his legacy, considering Captain America was literally created as propaganda during the world war.How can Cap ever stand alongside superman as america's heroes?

What is the overall narrative end goal to this? It destroys the core of the character instead of adding to it. It'd be like instead of Bruce Wayne watching his parents murder. Bruce Wayne killed them himself to get his fortune faster but the shock of the deed made him forget and repress the memory. The core of the character is tainted and literally unfixable unless you reboot the entire universe.

Wonder Woman, Spider-man, and JL do not have the foundation to be better than Logan. They are not sequels nor do they end a trilogy. The emotional attachment to the characters are lessened as a result, thus so is character investment. For instance, if Diana's mother dies in WW, it will not be comparable to when Xavier dies in Logan. Same goes for Aunt May in Spider-man or any character at all in JL. Logan has the advantage of having preestablished relationships, less needed world building, and a large overarching character narrative.

Guardians and Thor are the only ones who have a chance, but they are disadvantaged by the fact, that they are not the end of a trilogy, and thus their capacity to take risks is limited.

Nick Fury should have PROVED Gorr was right. That's how you fix the thematic elements of this arc. There is no catalyst! Thor or the gods collectively should have caused this through an unforgivable action. Having bad personality traits (vengeful for instance) is not god exclusive and not all gods are. What a generalisation!

This is actually worse than I could have ever imagined. How to begin?!

Disclaimer: I actually like Thors axe MORE than the mjolnir. My issue with Thor being unworthy is that they depict him as less powetful (which shouldn't be the case), and he was not only kicked out his own book and name but they didn't even give him an on-going solo series. If there can be multiple captain America's I don't mind their being more than one person wielding A hammer. So in short, aversion to the idea of Thor not having his weapon does not influence my view of this arc.

What Nick whispered to Thor is problematic on so many different levels. The truthiness of the statement doesn't matter. Whether it's right or wrong doesn't matter.

-It reveals that Thor's unworthiness is completely and utterly psychological. It has nothing to do with anything of substance. It's essentially insecurity and pessimism. It SHOULDN'T change the enchantment on the hammer. It SHOULDN'T change how the universe works. it was mind games the whole time. Thor having self-esteem issues have NOTHING to do with the hammer's purpose. The problem with that though, is that it INVALIDATES the entire reason to write the Unworthy Thor mini-series. If Thor believes what Nick Fury said is True, then he would have never attempted to get his hammer back from Jane in the first place. Not only that, he should never have considered the other gods as suspects in Thor girls identity mystery.

-What Nick Fury said should have had absolutely no baring on All father Odin's ability to pick up the Hammer!!! Playing mind games with Thor has nothing to do with Odin picking up his own damn hammer. Marvel and Aaron never had ANY idea what Nick Fury said. They just needed to make an agenda. The whisper said nothing. Only later on did they come up with anything. Nick Fury saying it should not have changed the universe. Odinson believing it should not have changed the universe.

- Why does it take Nick Fury saying it to make Thor Unworthy even though Gorr said the same thing to Thor? Why didn't it make him Unworthy when he fought Gorr? It's like an opinion dude. LITERALLY. Gorr and Nick fury's OPINION should not actually change the Marvel Universe as we know it. If no gods are worthy than WHY IN THE HELL WAS Mjolnir wielded by gods exclusively for thousands of years! Did the Hammer suddenly change it's mind? What actions on the gods part made the Hammer no longer able to be wielded by gods?

- What Nick Fury said implies that no gods are worthy of the hammer(s). Meaning that only non gods will have the hammer for the foreseeable future. That's just stupid. Period. It's actually a catch-22. The Hammer makes people into gods! If no god is worthy than guess what? The Hammer is creating a being that is inherently unworthy of it by default. So in actuality, the idea that gods are unworthy of the hammer is rejected by the very purpose of the hammer. It only reinforce the fact, that this is all in Odinson's head.

- Ultimate War Thor is just wow. THEY ALREADY DID THIS. A new mystery person claims the hammer that OG Thor couldn't or refused to pick up. We've been over this! It's a rehash! Not only that, Marevl didn't just mislead us. They outright lied. So many promotions with Odinson with the Ultimate Hammer. Hell, they even have phone games that made it an alternative skin!

This is the terrible part. Marvel just cant help destroying it's own characters. Disrespecting their characters. Character assassinating their characters. When will it end? Mary Jane x Peter is never coming back? Emma frost is willing to commit genocide because her boyfriend died? Captain Marvel is a fascist? Captain America is a neo-nazi? Tony Stark is not a Stark? The Fantastic four was written out of Marvel? When will this era of Marvel end?

The only upside of taking miles out of the ultimate universe is the chance of him interacting peter. But marvel being bad story tellers as is the norm nowadays stuffed him into his own solo book with almost no interaction with peter.

Miles should not have been given his own title in this way. What should have happened, is two spider-man books.

Amazing Series would follow peter as per usual. Ideally without this tony stark rip off nonsense .

Spider-men would be about both characters with a focus on Miles. The prototype for this has already been written!