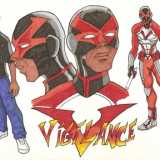 A freshmen in college at Central University, Ezekiel was enjoy his life adjusting to college life. Unknown To Ezekiel is the legacy of his grandfather Jerome Washington who for decades has fought crime in the city streets as the legendary crimefighter known as Vigilance.

On the eve of the Washington family reunion, Jerome's archenemy, The brotherhood of the hammer, sent an assassin to terminate Jerome who is now in his seventies and his only grandson Ezekiel did everything he could to protect his grandfather to no avail. Jerome Washington's life ended at the edge of an assassin's knife.

The only one to know of Jerome's legacy was Jerome's only son and Ezekiel's father, Edward Washington who took on the identity of Vigilance in his Career and eventually became a detective.

Ezekiel's legacy was forged with the revelation of Jerome's secret base of operations and with the latest incarnation of the Vigilance suit, The defender of the righteous is back with youthful blood pumping through his veins and personal problems that conflict with his identity.