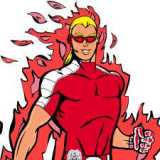 This is an update. I have updated. My status in not unupdated. Is that a word?

As with Blackest Night, here is the Brightest Day Reading Order as best as I can assemble it along with the work of others added to my own.  This is not current as the Story Arc is not complete but I will come back and update as I can.  I have not read all of the Brightest Day Story to date but will and will be diligent in keeping this as accurate as possible.

PLEASE HELP WITH VETTING THIS LIST AS I AM GATHERING FROM MANY SOURCES.  I WANT TO READ THEM IN ORDER WITH CROSSOVERS AS WELL.  THANKS!

In the last few months, I've gone back to reading DC Comics in lieu of Marvel Comics for a nice change.  Now, being a fan of both Companies and their heroes, this isn't an unusual change for me.  I like to read story lines instead of the individual issues as they come out so I can get more story at once unlike my old habits where I read everything right when it came out.  For now, Green Lantern after finishing Planet Hulk through the current issues of Post-Fall of the Hulks which I'm currently up to date on.  At any rate, I'm back to Brightest Day now since I've skipped the last 3 or 4 months.  Well, as is my habit, I went looking for a Checklist, an order more or less, in which to read what I've missed.  That created a dilemma because it's hard to find one sometimes.  So, I made one, to the best of my ability, by incorporating release dates and the work of many others who had parts of the list but not the whole thing.  As such, I figured I'd post them here, first the Blackest Night reading list (loosely posted as an "Order") and then in my next blog, Brightest Day.

At any rate, I hope this helps you if you are a comic book reader and, if not, well, maybe you just enjoy reading lists and want to read mine.  So, to the best of my ability, Blackest Night (incorporating the work of others along with my own sorting and sifting).

I've received a lot of positive feedback on my List, "Powerful Items of the Comics Multiverse" but have recently found the list to be unwieldy.  It has 173 Items on it and grows constantly so I have decided to break it down into 3 Lists.  Marvel, DC and Other.

As such, I get to go through the Recommend and Comment process again and would appreciate it if you would help me out.  There are a couple of things to note because folks invariably comment on a couple of things...

1.  They are not ranked by "Most Powerful."  That would be insane to even attempt.
2.  Though there is no true rhyme or reason, each is basically broken down by type, association or character.
3.  If you see something missing, please let me know.  I like reading about new things and there are plenty of items not on there.

At any rate, here are the links to the Original and New Lists.  Enjoy!

Power Items of the Comics Multiverse - Other than Marvel/DC
http://www.comicvine.com/myvine/tintallin/power-items-of-the-comics-multiverse-other-than-marveldc/75-19706/

Ok, I've have to say about the Quests...and the Author of such...

So, this last go around, people have gone insane over some of the answers in latest Quest, specifically Arachnaphobia #1 which, as far as I know, is wrong.  Now, I won't give away the answer here, but will post my clue to the character.

Arachnophobia:
#1: One of these guys, but not the Green One.  The answer is wrong, but nevertheless, it is the answer.  Boots might have this type of toe.

So, having said that, let's put this thing in perspective.  I don't know what SuperCoonce was thinking nor am I going to defend him.  As far as I know, he comes up with the Quests and has never stated, that I have read, who or if he has help.  So far, I've enjoyed the Quests although I scratch my head over some of the answers.  I've repeatedly seen where someone posted "that's not the obvious answer" or something similar.

Have you heard the saying, "If it were easy, everyone would be doing it."  Personally, as an actor, I like that saying.  We can't all be in the NBA, be a pro baseball player or come up with Quests for Comic Vine.   But I find something disturbing...like this comment in the Quest Thread that made me want to smack somebody.

" none of them are bugged I assure you, multiple people have finished it if you check the homepage"

Ok.  Thanks for the hint.  So...what was the hint again?  As far as I know, none of the characters in the movies end up being this guy.  As a matter of fact, I checked this guys movie page and this is what I got back... "  We don't have any info about Xxxxxxxxx's related movies. Help us fill it in!".

That means that he was not represented.  So I have something to say directly to you on that one.  SO WHAT!  It happens.  What happens?  Ask Forrest Gump.  The answer wasn't correct, but it was in the same family of villains.  Maybe the page misdirected, maybe it was intentional, maybe a meteor hit the Earth and there was a bad keystroke event.  Whatever the case...

Thanks for the fun and interesting Quests, much appreciated, I forgive you any "mistakes" you made since they are not "what I would have put in there" and you get to live another day.  By the way, that is what is called a facetious statement.  Click on a tab up top and look that up on dictionary.com.

Thanks for the Quests and the enjoyment I've received from them, getting to know a few people, working in a community of people helping people (even if it is a message board) and even getting a few followers of my own to hear me chat and blather endlessly on about nothing.  It's like Twitter with really cool pictures.

But get over it.  I thought about messaging SuperCoonce and asking, "WTF?"  But I looked, I do follow him, and he has 25,616 followers. I'm a voice in the wilderness on this one though he did give me a direct reply once when he asked what I thought.  I gave him an "actors review" on it.  I posted what I found good about the Quests and what I didn't care for in a reasonable tone.  "This is stupid" is not a review.

As I have found Geeks (not nerds which I've run across a few on who are mean spirited and small minded punks) are typically fun to be around and scary smart, I've had a lot more fun here than on Facebook playing Mafia Wars or Twitter where I'm talking to myself, I think that the Quests have been fine, made me learn and given me an opportunity to interact.  And when one seems to go awry, well, no biggie.  I don't necessarily agree with some of the answers, but then again, I'm here to have fun.

So, I'll leave you with this little saying..."Any fool can criticize, condemn or complain.  Most fools do."  Turn that energy into a useful rebuttal and quit being a whiny little biatch.  Yes?  Screaming like a little girl about one answer only makes you sound like a moon bat.  Don't be a moon bat.  And let's remember, let's have fun out there.


Ok, at my wife’s recommendation, I am posting this for discussion and insight into playing a Lantern Corps Member in Heroes Unlimited in the Palladium Fantasy Roleplaying setting and had some questions about some of the Lantern Powers that you may be able to help me with.

As I’ve read through the rings and their powers, I have come to the conclusion that Positive and Negative emotions can have effects outside of the norm and wanted your thoughts.   So, here’s a brief recap on the Rings and their basis.

NOTE: I have already put the Ring Powers in Game Context, damage, Shield strength, etc by comparing them to like powers and items.   As such, the technical details were relatively easy to quantify.   It will still need to be play tested but that will come soon.   It’s all on a pretty Excel sheet ready to go.

Red – Rage/Anger – Can turn the user into a mindless, rampaging beast.

Orange – Avarice/Greed – I would say enhances that emotion in a person.

Yellow – Fear – No harmful effect though based on a negative emotion.   Base on the ability to instill fear.

Blue – Hope – The ultimate hope and I would say eternal optimist.

Indigo – Compassion – Can even make someone who doesn’t feel compassion feel it.   A very nasty punishment for a serial killer.

Violet – Love – Ok, this is the most warped of all to me.   It can be downright brainwashing.   More on this later because a lot of my thoughts are here.

White – Life – I still don’t have enough information on this other than it can raise the dead…a few other things.

Black – Death – Will change colors to another ring after scanning you to match your “greatest” emotion.   So it can change to Red or otherwise as it did with Superboy.

So, to my questions/statements: These are observations and not statements of fact.   I’m trying to clarify them or put them in gaming context.

For the purposes of this, I will refer to “the character” or “my character” for any examples.

Violet Ring: When someone puts on a Star Sapphire ring, they can be/are brainwashed into the whole hippy-dippy love thing and run around converting other Star Sapphires.   That would relate to either an Insanity or an Obsession in game context.   It doesn’t make the character unplayable, but how would you describe that?

Example: The Star Sapphire is flying to a fire to help rescue people and comes in range of two people in love about to break up.   Suddenly, she flies in the other direction to “help” the two lovers make up.   The heck with the people burning.

Red Ring: Put on the ring and roll a saving throw versus insanity.   If you fail, give me the character sheet.   Your character just became a mindless beast running around killing everything.   For an above average, outstanding player, I might tell them “Go kill everything” until they are saved or are destroyed.   Remember, in game context, there will be Non-Ring bearers that are just as powerful as they are.

But red could make them unplayable.

I could go on and one here, but do you see where I’m going?   Perhaps some insight before we play on Saturday to help me wrap my head around this and play test it with some foresight so I don’t spend most of the game arguing “That wouldn’t happen…” type questions.

I sort of  like this Comic Vine thing.  All in one blogging, posting, linking and everything else.  And it doesn't get crowded.  I can look at things I like with a Wiki experience and don't have a ton of people "posting crap" on my wall.

This is just a short blog to say...come on in.  The water is fine.  Check it out!

P.S.  I think I'll start a "Dance of the Dead" Page and see how that works out.

Ok, so I have to start a Blog for the Quest Reward.

Be careful what you ask for.  So says Gravedigger.  I need a follower too.  I prefer minions but whatever.  Have a day!