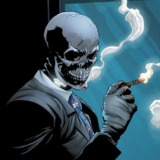 A moment of supplication.

A minute of laxity.

Ebony spikes honeycombed out of the ground, irregular patterns emerging in all corners. Breaking the horizon, these shapes were accompanied by the writhing energies of a dying world. These were the machinations of Chaos, the temptations of the Warp, and the promises of bloodthirsty Gods. Upon each twisting spire hung the helpless dead, stripped and naked down to the flesh and bone. Orbital bombardments long ago tore the planet apart. Its populations were scattered to the winds, and the weak were purged almost instantly. Millions died in the initial tempest. Thousands more were enslaved to the cause of the invaders, most likely already lost to the depraved prayers and ritualistic murders their patron deities screamed and howled for.

Planetary defense forces stayed strong, stronger than initially suspected for a world of its size. Bloodied and scattered, they maintained contact with their dwindling bastions as best they could. This would be a launching point for the historic distress signal sent directly to Ferravian airspace, a coded message that would spark an interstellar crisis. The Storm of Chaos raging around Scion, this battered and embittered world, did not compare to the wider ramifications. The deaths here would be paltry to a potential future disaster. Scion confirmed the greatest fears of Imperial scholars as well as those of the High Lords of Symaar Primus. War would come to the Earthen Collective. Only the Ferravian Ring stood between it and the single largest incursion of Chaos forces seen in over one thousand years.

Scion burned, and the time of prayer came to an end. The Immortals of Ferravius found no joy here this day. Upon once-proud Scion, home of one of their own Warrior-Brotherhoods, rested nothing but the remnants of a horrible conflict. Daemonic tendrils cracked the planet apart, harvesting the core for eldritch powers beyond the comprehension of unprepared minds. Ghostly images of star-beasts from beyond the void emerged from the corners of nothingness, replacing sanity with madness. There was no other option. Scion had been turned into a daemonic altar of pure uncompromising hatred and despair.

Without further delay, the Immortals unleashed their planet-destroying weapons, lightning and energies poured out from the hearts of captured stars, and erased all before them. The hands of hungry many-angled creatures from between realities were scorched, and they pulled away, if only to merely wait for the next feast presented to them by the servants of their greater powers, their counterparts having grown to further unending godliness. These shadows of the Dark Gods, these unforgiving and unrelenting slaves of the Chaos Clan...

Ferravius would soon come under fire.

Not a moment could be spared.