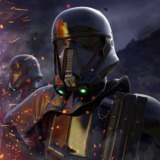 A roaming spirit of vengeance, cast out of Heaven and Hell, sent here for one purpose - a purpose he simultaneously defies and yet knows nothing about.

Not a zombie or a ghost, but a lich, able to command limited amounts of undead at the cost of some of his necroplasm blood.

Necroplasm is a miracle fluid in the afterlife, usually infused in the bodies of liches as a means of giving them a way to cope with the shock of coming back. This necroplasm blood enables enhanced physical functions far exceeding those of normal humans, resurrection of the dead, and various projectile abilities including firearms with necroplasm bullets, chain whips, and telekinetic attacks. Necroplasm also offers telepathic resistance and accelerated regenerative capabilities.

The origins of the fluid are rooted in necromancy, hence its name, but it is the only way to give liches a functioning body. They cannot return to the corpse of their origin, nor create one of their own accord. Rather, they are given one that suits the needs they are going to require during their return to the living. Through some deal or bargaining, these liches come back in a state of undeath - but they need time to adjust to their new minds and bodies, lest they are rejected entirely.

Necroplasm is the concentrated essence of a soul, melted down into a physical liquid, and processed into a manufactured ooze. It is an inexhaustible resource, allowing for endless power to be generated from it, but at a terrible cost. Normally, liches and other necromancers use their necroplasm blood to instill a sense of life to their undead minions. Some adventurous (or insane) among them might even experiment in combining souls and corpses into monstrous effigies of rotting flesh and bone, making for truly horrific titans.

When a lich is particularly agitated, angry, or has an abundance of energy, their eyes usually burn with smoky fields of necroplasm, meaning that their power is increased significantly.

Being undead, liches cannot directly interact with humankind. Their very presence is frowned upon in normal, everyday society. Operating behind the scenes, they can either save generations or condemn entire populations into a state of living death. But, inevitably, there are a handful that try to return to their previous lives. They all fail, and the severity of their failure varies. Some elect to protect those they love, but are not loved by in return. Others become tyrants.

Wake Up, It's Not Safe Here