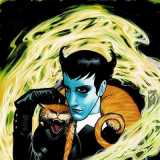 This is a tough one to call. I've never been a fan of The Sentry but I do believe he could defeat J'onn in a head to head battle. The prep time is a concern to Robert as the Martian can conceivably gain access to a Phantom Zone projector from Superman or some other BFR plot tool. However I have rarely seen J'onn be so proactive when he is in character. Even when he was distrustful of the rest of the Justice League he only made dossiers on the team's powers and abilities. He never actively worked against them.

As power goes I'd say The Sentry has the upper hand. He has physical stats to at least keep up with the Martian. His molecular manipulation puts him over the top (as much as people hate to admit it he did defeat and powered down Molecule Man). Even J'onn's telepathy is unlikely to help him as Robert has been able to resist Omega Level telepaths in Marvel 616. I'd say J'onn's only hope is if he can become Fernus. Then we would have a great fight on our hands.

Pre-52 Deathstroke has more feats to his name, including (PIS aside) defeating a good chunk of the Justice League. I'll give this to Slade.

Circe is an extremely powerful magic user. If she has the slightest opportunity she can roast Supes. However Superman's speed would be enough to call the battle into question alone. Since he has 3 hours to prep he should be able to blitz Circe without much trouble. However Ares can undoubtedly withstand a barrage from Superman until he can use magic to end the fight. Superman should stop at round 5. The previous 4 won't cause him too much trouble.

I would assume Psylocke has the advantage. If I remember correctly she no longer needs to make contact with her psychic knife to incapacitate an opponent. The only question is whether Kitty is impervious to Telepathic attacks when she is intagible. I don't believe that is the case (however I am not entirely sure on this point) due to her having a psionic presence while using her powers (i.e. she can think and react while intagible). Betsy should win this without much trouble.

Jae Lee's artwork is simply incredible. I will buy almost any book that he is a part of. Hopefully the plot is strong enough to stand with the art and not be overrun by it.

Honestly I've enjoyed every Batman: Arkham game so far. (Arkham Origins was undoubtedly flawed, but still a fun game nonetheless.) The selling point of Arkham Knight is another piece of the continuity coupled with a drivable Batmobile. I am incredibly excited for this game.

The Arkham games have some of the best art design around and movie makers could learn a thing or two from Rocksteady regarding how Batman should look and feel. These games hit the nail on the head in my opinion.

Rocket Raccoon shouldn't really be considered a threat. I love him to death but all of his strategy feats are hearsay whereas Nick and Scott have tangible examples of tactical prowess.

As for the fight at hand I'd say it's a very close call but Fury edges out Scott by a hair. Fury has more experience with conventional ground troops than Scott does. Also Fury has certain logistical capabilities for coordinating large scale attacks that Scott might not necessarily have. I personally think that Scott has better strategy and tactical feats than Nick Fury in 616 continuity but given the circumstances of the fight Fury should win.

I'd put my money on T'Challa.

Skills wise Bruce and T'challa have an edge over Cap (in my opinion Bruce is a better hand to hand fighter than T'challa discounting physical ability but they are close enough to make this a moot point).

However both T'challa and Steve have the advantage over Bruce (Heart shaped herb, Super Soldier Serum etc...). This means that they are capable of above human feats while Bruce is capable of only peak-human feats.

As for location, nobody knows an urban environment like Bruce does. He has the slight advantage there.

All in all T'challa has the skill, strength, speed, and strategy to win.

I have to say Iron Man is one of the most polished Comic Book movies I've ever seen. Perfectly cast, wonderfully paced, and visually stunning. Iron Man was the first comic book hero I've ever seen that looked fantastic when adapted to a live action setting. Comic book fans had waited a very long time for a hero that was pure cool and had mass market appeal (not in the sense of mainstream gross, that's been a part of comic movies for a long time. More in the sense of drawing in people who would never even think about seeing a superhero movie). I honestly think Iron Man revived the super hero genre. Not to mention it introduced the concept of non-linear cannon into mainstream movies.

However Iron Man played it very safe. Iron Man was all about style over substance (which I actually approved of in that case). Not really any huge thematic elements or character development. Tony starts out as a dick and becomes slightly less of a dick. Pepper while clever and intimidating was ultimately a housemaid. Rhodey was not much beside a plot tool and happened to be a great token black guy. Obediah was the two faced corporate bad guy who was playing both sides against the middle to make some money. The bad guys were stock middle eastern dudes (which to be fair was a nice transition from the comic vietnam origin story). Everything was very standard blockbuster fair, except this time there was Iron Man.

The Dark Knight had one of the best performances ever seen on film. Ledger's joker was out of this world. And his character was wonderfully complemented by Nolan's dialogue and plot line. The organized chaos that the joker unleashes is nerd crushingly good. Not to mention Aaron Eckhart's criminally underrated performance as Harvey Dent. The downfall and transformation into Two-Face is wonderfully done even though it seems to happen a bit quickly. Gary Oldman is fantastic as always and Michael Cain is a favorite Alfred of mine. Great soundtrack, great art direction and set design. VFX and SFX are nicely gritty and lend themselves to the realistic tone of the Nolan universe. Nolan took a lot of chances but clearly respected the heart of Batman and understands the essence of the character and Gotham city.

However sometimes Nolan was a little too insistent on clinging to reality and his idea of what Gotham is. One of the best parts of Batman Begins is the introduction of Batman's "smart cape" which can become a glider with a little electric current. It was cool, it was practical, and it was Batman. However Batman's next innovation is multiple points of articulation on his neck so he can turn his head. That is the most disappointing enhancement to the the Batsuit I've ever heard of. On top of over-realism, I've never like Christian Bale as Batman. I think he makes a pretty good Bruce Wayne but his Batman is atrocious. The Bat growl was the most cringe inducing thing I had heard in a long time (and keep in my I totally realize that the growl is comic cannon, but it sounded stupid). Rachel was just a waste of screen time in the Dark Knight. Supposedly she was the catalyst for Harvey, Bruce, and just about everyone else in the movie. But I never saw why anyone cared about her.

In the end each film took the opposite approach to moviemaking. Iron Man took the straight and narrow while The Dark Knight had tremendous highs as well as tremendous lows. I think The Dark Knight is the more ambitious of the two and earned the right to be more respected as a smart and artsy blockbuster. But I think Iron Man did more for comic book movies than just about any movie ever. It made the nerd cool and made the audience believe that a hero could really be super.