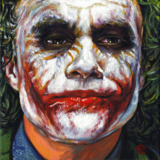 Take notes Jesus because nobody gets resurrected as stylishly as me. The titan has returned.

I need votes my friends! Team TNT shall prevail!

Bored so I thought i'd make a blog. Don't really care about my post count though....

"Sterling Archer (voiced by H. Jon Benjamin) was born in a bar in Tangiers, in northern Morocco, Africa. According to the episodeOnce Bitten, Archer celebrated his sixth birthday while his mother assisted in overthrowing the government of Guatemala. (In reality, the CIA overthrew Guatemala's government in 1954, putting his birth year around 1948. Malory speculated in Lo Scandalo that Archer was conceived shortly before she participated in Operation Gladio, which began the same year.Woodhouse transported him to an OSS safe-house as a newborn; that organization's covert operations duties were transferred to the CIA in July 1948.) Archer lost his virginity at age 12 to his female Brazilian au pair, who was seemingly unaware of the American age of consent.

He spent up to 15 years at boarding school, despite American schooling taking 13 years. His hobby was lacrosse, and flashbacks have indicated he had few friends. At age 18, he was regarded as the most recruited lacrosse player in America, although an incident with a crazed stalker gut-shooting him cost him both his lacrosse career and a possible scholarship to Johns Hopkins University (although it is implied this would not have happened anyway because of his poor SAT scores). A picture of Archer inPlacebo Effect shows him graduating from Georgetown University, implying he is at least smart enough to receive a bachelor's degree in an unknown major. (Although according to his mother, he flunked out of college.)

His relationship with his mother Malory—-who is also his boss atISIS—-is often strained, never sympathetic, and sometimes bluntly abusive. In The Double Deuce it is implied that Malory overused "negative reinforcement" on him during his childhood, making him over-dependent on her. She was absent for lengthy periods of his childhood and he was raised by Woodhouse, who had been with his family since assisting Malory at his birth. Archer believed for most of his life that his father was a deceased, decorated Navy pilot,John Fitzgerald Archer. It was revealed in Dial M for Motherthat his father may be KGB head Major Nikolai Jakov, ODINdirector Len Trexler, or jazz drummer Buddy Rich. Later added to the list of possible fathers was an unnamed young Italian man who was gunned down in the streets of Italy and had "blue eyes, full lips and thick wavy hair".[1]

Upon growing up, Archer began work as a spy at his mother's agency, quickly climbing the ranks as their top spy thanks to both his genuine skill and his mother's preferential treatment. Archer has the less than masculine codename of "Duchess " (taken from his mother's beloved Afghan hound, though Malory Archer denies this) and used to have an on-again, off-again relationship withfellow agent Lana Kane, which makes their working environment tenuous and difficult. When not on missions, Archer resides in an ISIS-owned penthouse in New York City, waited on by the elderly yet capable Woodhouse." -http://archer.wikia.com/wiki/Sterling_Archer

Shoots Crenshaw/Kremenski, 3 shots to the chest and 1 to the head as he is falling back.

Using an improvised weapon(plate) archer hits a bomber directly in the head so hard he knocks him clean out.

Not too many impressive marksmanship feats in season one, however he has some very impressive ones in later seasons.

Archer is able to sneak up on a highly trained agent Conway Stern.

Archer and Lana break into a fortified museum to steal a large diamond, this is of course a job for ISIS to test the Museum's security.

Drowning with a harpoon in his chest Archer takes out 3 men underwater using a knife and his opponents weapons.

Archer is one tough character, I attribute this to him having a very low level toon force and another thing that points to toon force is him never being hit by bullets even when hordes of machine gun toting men are shooting at him.

Archer survives being stabbed in the back both literally and figuratively.

With a bullet in his foot Archer and Lana both survive a huge explosion without a scratch.

Without any painkillers or anesthesia a hole is drilled into Archer's head to insert a small microchip.

Archer survives being thrown through the windshield of a speeding car.

I did it, I finally remembered to make a blog when I hit a thousand mark! I always pass it XD. Crazy that I post so much here but I enjoy it and I enjoy learning and conversing with you guys, my fellow viners.