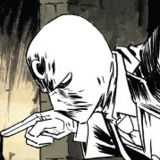 Maybe Man of Steel was the first

The Man of Steel was the first of DC next line of superhero movies. But then the news came about Man of Steel featuring Batman, I thought it sounded weird. Yes, he had a very good trilogy a few years ago and it could be confusing to start a new one. But then I started thinking again. What if DC would be the first to create a series of films, that would be related but not sequels. Like of Man of Steel 2 would be called Superman/Batman it would be a sequel for Superman and a prequel for Batman. Anyone else thought of this? I mean, sure, Batman will get his own film. But maybe all of DC's movie will be like this, connected in movies where some of them appear and are introduced and the next film of the series will only feature one of them. Maybe this sounds messy but I hope you get it.