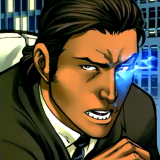 Mini Biography: It is hard to tell, but the vigilante known as the Ball and Chain are actually two different entities. The actual ball and chain with a gruesome face carved into it is actually a living thing that has been on the Earth for at least 300 years, using its ability to rule over the minds it is chained to, to work as a vigilante. Marco is the second entity. A teenager who found the ball and chain out of sheer luck, and was saved by the supernatural prison tool. It's less of a partnership as Ball rules Marco's mind, and forces him through dangerous situations,using his body to kill those guilty of criminal actions. A silver lining for Marco came in when he met the Children Of the Damned, a team of misfit heroes that welcomed him, as the Ball and Chain within their ranks. Marco developed a short lived crush on the member Erica Zann before she was possessed,and put into a coma. BC later risked his life to help complete a mission which ended with Marco in the hospital. He's out today, but with more emotional scars then ever. With the death of his foster parents, and emergence of a new villain, out for revenge against BC, and more specifically Marco.

Looks
Marco is of Mexican decent, giving him a darker skin tone. His fairly long strands of chestnut colored  hair are pushed back behind his ears more or less to keep it out of his eyes. His eyebrows are naturally arched in a way that looks like he is deep thought. The bridge of his nose is shallow, but the tip is pointed. He has a light build with hard, and lean muscle outlining his body. Most of the time he wears street cloths, and sometimes puts on a canary yellow hoodie, with a red bandana, and goggles.

When Ball is in control his body is transformed to become much heavier built, and taller. His eyes look more like they are glaring at you when this happens. In this form they wear a purple "hood" over their head, and a lime green jacket.

Ball is basically a ball, and chain with a face. The mouth is wide, and has been forged permanently into a toothy grin. The metal looking eyes also appear to be cruel yet old indicated by the many lines carved around them.

Ball (alone):
Indestructibility- Ball cannot be broke, nor does he have a reachable melting point. Even rust cannot form on him.
telepathy- Ball is a powerful telelpath, however he can only do this when latched to a person. He is able to easily crush defenses and access a persons mind.
telepathic defense- Ball's mind is protected by extremely powerful barriers that are up without him even needing to concentrate.
electric pulses- Ball can send electrical pulses through the body he is latched onto allowing him to control the persons body by interrupting the pulses from the persons brain and replacing it with his own. In other words no matter how strong someones mind is they cannot resist his control over their body as it is not controlling their mind.
telepath trap- Instead of using his defenses, Ball can lure an unsuspecting telepath into his mind and then close the figurative door to trap them inside his mind.

Ball and Chain (with host):
Strength: BC has strength that goes far above the average humans. Able to lift 10 tons and sometimes go past this limit due to him being able to push past the strain.

Agility- BC is able to enhance his hosts balance ,and use his ,already enhanced speed , and strength to increase his mobility in combat ,or hard to navigate spaces.

Speed- Ball and Chains speed allows him to dodge bullets and punches from superhumans. He can keep pace with a car going 40 miles per hour if he ever tries.

Inability to feel pain- BC cannot feel the pain as he does not allow himself to. Only the host feels the pain of a wound or burn, while Ball, the controller is unharmed.

Fighting ability- Throughout his many years of life BC has learned brawler techniques to fighting, relying more on his strength and agility to keep an edge in a fight.

Agility: Marco is being taught parkour by his friend, Umbra. He has shown some natural  skill with it. Still Marco has much to learn about the reaches of his agility.

Fighting skill: Marco is learning a mix of boxing and other martial arts from Wildcat. He is growing in finesse and musculature the more he trains in this and can only get better.

Sword skill-  Marco is also being taught by Bloodstone in the ways of the sword. Like most of his other skills he is a novice, but shows potential.

Engineering-  Marco has been able to repair a motorcycle he found in the garbage to be workable without a proper instructions.

Strength of the mind: Through being attached to a telepathic entity that usually crushes his defenses, Marco has developed a strong defence against attacks on his mind. He can even give powerful telepaths a run for their money.

Weapons and items (and animals)

Ball and chain-   His most obvious choice for the towering man known as Ball and Chain. It is actually more the user than the weapon in the relationship. It's able to cause massive blunt damage, wrap around some objects and is even able to bite down with extremely strong force, capable of going through steel like a knife through butter. This is only used when they are Ball and Chain.

Sword- A katana given to Marco by Bloodstone after she had figured out he was Ball and Chain. He has slowly gotten used to the blade and is learning to put it to good use.

Bow and arrows- Marco uses a makeshift bow when in costume (not as Ball and Chain) that he uses to mimic his alter egos leader, Longshot. He is untrained with a bow and thus a terrible shot. His arrows are blunt so he doesn't kill anyone.

Motorcycle- Marco was able to repair a motorcycle he had found in the dump and use it as transport as his parents rarely cared to drive him anywhere, it came in handy later when he became Ball and Chain as a mode of transportation. It wasn't built very well and was a safety hazard, with the breaks not always registering. When a friend, Overkill realized he didn't have a license he took the bike away until Marco earned his license. Umbra replaced it with a purple bike later.

Yogi: Yogi is Marco's canine companion. As a bloodhound he has a superb sense of smell, and is able to track anything, or  anybody he gets a whiff of. As a puppy he does not do well in combat yet. Yogi is a dark shade of grey, with brown eyes.