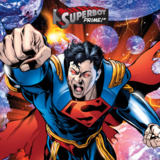 Naruto and Sasuke clears, they are more powerful than the Bleach guys right now

Anyone of these 2 guys can solo DSS

Lord Beerus the God Of Destruction can absolutely stomp Death Sentry and so can his master Whis, as Whis can ACTUALLY manipulate time unlike Sentry who can't, and Whis's time controling power has been confirmed as well

Beerus is much faster than especially in combat and has much faster reflexes Sentry will get speed blitzed, DSS's combat/fighting speed is nowhere near the level of Beerus's so Sentry won't even be able to tag him, where as Beerus can just easily spam solar system busting level energy blasts at DSS and nuke him to oblivion again and again until he gets bored

Sentry has never shown regeneration from getting blasted by energy attacks of that magnitude which Beerus can casually spam in his sleep, and since it took Sentry a very long time to regenerate his atoms in the sun from complete disintegration, which he will be disintegrated when Beerus nukes him with multiple solar system busting blasts and take him time to regrow just like in the sun, this counts as a win

Now to address the false misleading information in this thread, Sentry is not a reality warper, and he cannot warp time and space, scans and instances of him doing so ? The only thing he has is matter manipulation, so I would love scans of Sentry warping reality and warping time and space xD this even sounds hilarious

@thetruebarryallen: Run for mod xD and its good that you intervened I have no problem in that...seems you got some sense into the other guy as he has apparently stopped

@renchamp I specifically removed realitywarper's name in newecho's post I quoted, to debate with newecho not him, but apparently for some reason he still sees his name and got the tag, or he actually wrote his name back in the post and screen shotted it after..he is the one who calls me out directly, many times despite what you told us

@renchamp please tell him to stop tagging and contacting me as you told us, but he is still doing so..

You was many times warned in forums for calling people "fanboys".

I'm not even surprised that you put yourself above writer's words...

By the way how comes that you are feeling targeted by my post : I didn't call anybody and you are reacting to it. :)

@renchamp realitywarper is still tagging me and contacting me about stuff that has already been taken care of, and although you strictly told us never to contact, call out and tag each other he is still doing it to me

By the way I will ignore the pollution of the obvious troll to concentrate on what interest us. ^^

I proved my points enough to don't bother with him.

I'm just surprised that the mods let him troll around.

There is a user realitywarper who is being very negative, insulting and verbal to others...@saren@sc@jedixman@bumpyboo