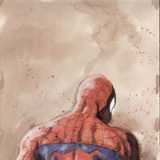 A Life On Elwell St (Part One)

It was a bright and temperate Saturday on Elwell St. And young Tommy Adams woke up, got dressed and ran downstairs and out of his house to greet his first real day of spring, that he didn’t have to spend stuck up in a classroom that is. He got outside and called up to his sister’s window.

“Jessebell! Jessebell come out and play with me!” He yelled at the top of his lungs

He got no reply from his sister so he walked across his yard to his sandbox were he kept all his good toys. He had action figures of every kind, huge monster trucks, and one wind-up helicopter. He had just started winding it up when he saw David, his best friend, walking by. Tommy thought David was “the coolest kid in the cave” because he was a year older than himself.

“Hey David” he said in a light voice “You wanna play with my helicopter?”

“Why else would I be here? You big dummy” David joked

The two laughed and began winding up the helicopter. After playing for while they looked across the street and saw Ms. Katie their babysitter, and as far as they were concerned the most beautiful girl in the world. She set every adolescent boy in the county aflame, but she never abused that fact. She was 23 years old and lived with her fiancé Rick Borges. She was going to school to be a veterinarian and to make money she babysat the local kids. So she knew just about every family in town. Her father had been the pastor at the local church until he passed away last year.

“Hi boys!” she called from her door as the two stared in awe

They walked over to her drive way and saw that she was packing up her car.

“Where are you headed? …Ms Katie” David said as his voice cracked a little

“ Oh out of town for a few days, I need to go pick up my mother” said Katie

“Cant she just drive here?” “Asked Tommy, happy to say anything to Katie

“F’raid not Tommy, she just had a stroke see and she doesn’t get around so well anymore.   My brother said we should put her in a nursing home but I wouldn’t have none of that. So I’m going to pick her right up and she’s coming to live with me.”

“Is your Ma as pretty as you?” Asked Tommy

“Tommy, David, Lunch is on!” cried Mrs. Adams from her porch

The boys said good day to Ms Katie and ran inside to fill their empty stomachs. The rest of the afternoon passed by without event and Tommy was a happy as could be

Until later that night…

That night rain was poring down on the little town and drowning out the normal sounds of a pleasant southern night. Tommy tossed and turned in his racecar bed all night. He glanced lazily over at his alarm clock it said “1:23”. Deciding his wasn’t falling asleep anytime soon he went down stairs to watch TV. Tommy was on his way to the kitchen for a pudding-snack when

Tommy jumped on his behind his couch and cured up into a ball. Trying to convince himself that the noise was just the thunder of the ranging storm outside. After a minute or two he gathered he courage and walked gentle towards the window.   It was difficult to see past the heavy rain. All Tommy could make out were the headlights of Katie’s car.

“cccccccceeeeeeeAAAAAAHHHHH” the fear grabbed him like a giant fist.

While he was cowering on the ground something occurred to Tommy.

“Katie’s Car, ohhh that’s what it was” he said aloud in relief

Tommy remembered that Katie’s car always made loud noises when she started it up because it was so old. “Piece o’crap” as his Father would say. Bathed in relief Tommy went back upstairs and quickly fell asleep.

The next morning Tommy, David, and Jessebell were making chalk drawings in the street, when David noticed something in Ms Katie’s driveway.

“Wow look at these marks!” David said with excitement

There was a long skid mark from Katie’s driveway out to the road. Tommy sighed to himself as he remembered the episode from last night. Then suddenly he saw something, the marks indicated that the car took a left towards town, but Tommy knew that Katie was taking the interstate to her brother's house to pick up her mother. That meant she should have been taking a right. He pointed this out to David.

“Yea that’s weird, plus why are these marks even here? Ms Katie was a real careful driver” said David

He looked up at David he was now rummaging through the garbage can on the side of the street. Tommy looked up and started to ask what he was doing when he pulled something out. It was Ms Katie's suitcase and the handle was covered in blood.

Tommy’s stomach dropped like a dead weight. He added it all up in his head, two loud screams last night, skid marks facing the wrong way, and a suitcase with blood on it. Someone else was driving Ms Katie’s car and whoever took it, took her with them……….
5 Comments