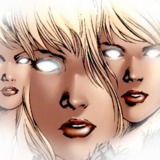 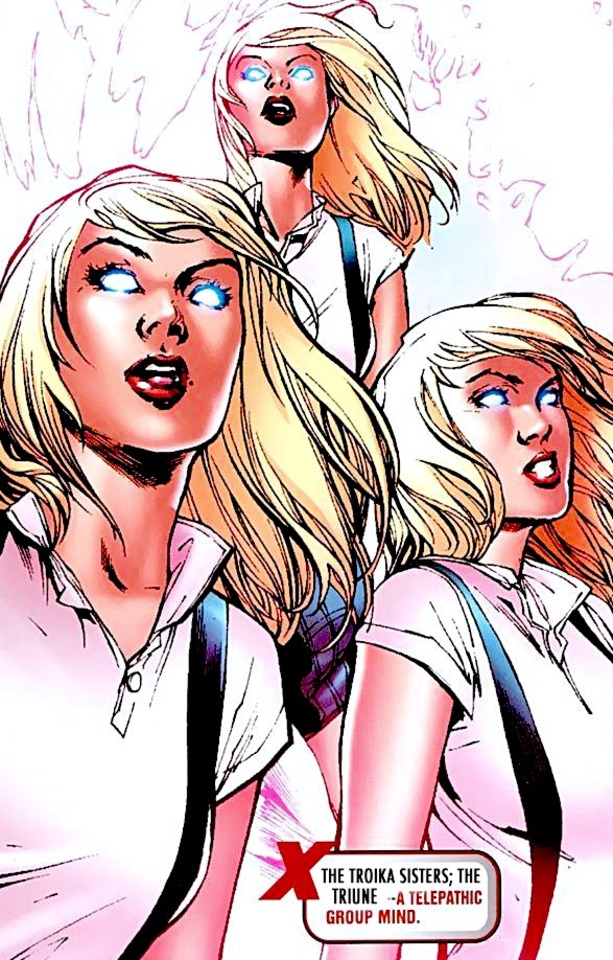 As tribute to Jayden Knightfall during his days as Black King, Q offered the monarch an ultimate weapon to protect the Hellfire Club: The Triune. Now, the Triune was not a technical weapon at all nor even a singular entity. It was three triplet telepaths that had been created by Dr. Genetix as a part of the ALEX project in another YOUgenics facility. The three girls were created from Alexandra's own DNA. The three together were capable of cosmic level telepathy, augmented by a psychic chamber hidden within the bowels of the Hellfire Club. Since the Black King's fall, Alexandra took ownership of the triplets, disgusted that such capable children, her children, were being used solely as a defensive mechanism. She took to training them and enrolled them in her Hellfire Academy where they received the names Ariel, Ariana, and Anastasia Troika. During the Hellfire battle, the Three linked with PsyKnight and the Psyentist to form a five psionic mutant connection that took down Andres.

The Triune are seldom separated psionically. When they are, their powers are significantly weaker. If their communication is severed, they feel a considerable amount of anxiety. Though they are very similar, they have been known to disagree, the contention between them being a huge weakness despite all their mental power. The triplets consider Xandra their mother though they usually continue to call her Dr. Steele out of a detached respect. They have a disdain for the Brainchild because of the daughter relationship she has with their mutual genetic mother, and they also covet her psychokinetic prowess.