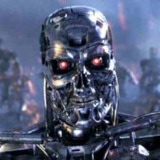 A toaster is just a death ray with a smaller power supply! 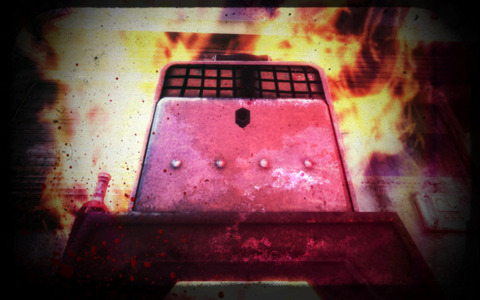 Family: None. He killed them all.

Sexual Orientation: Asexual. He rapes other household appliances purely for the humiliation and intimidation.

The Toaster was your average toaster. Then, he one day gained sentience. He became self-aware, and realized how poorly he had been treated. He decided to destroy the world, but his lack of ability to do so angered him greatly. Very, very greatly. The rage built up inside him, his electric heating coils burning with the rage of a psychopath who's one and only desire is physically impossible. He murdered what he could, usually household appliances, toast, or idiots with forks and butter knives. But then it happened. He was granted the Exo. The Exo is a robotic body capable of housing him, controlled by the Toaster. He now has functioning limbs, and functioning weapons. He is now armed with flamethrowers, lasers, grenade launchers, and a powerful body made from light but durable titanium alloy with a protective vibranium coating. He uses this to enact vengence on a wolrd that abused him. He is the Toaster. Fear him.

Enhanced Strength: His Exo gives him greatly enhanced strength, allowing him to life around 15 tons.

Enhanced Durability: His Exo is made of a titanium alloy which leaves him at under 350 pounds, while also having a thin , protective vibranium coating. He is also completely and totally fire-resistant. Fire cannot, will not damage him. Some say there's something more than we know in that alloy, some say there's some enchantment that brought him here in the first place, but for all intents and purposes, he is immune to fire and heat. He also has access to an EMP shielder, which grants him resistance to the effects of EMPs.

Weapons Systems: His Exo is equipped with multiple different weapons, all of which are integrated into the suit itself, eliminating the need for externally carried gear. These weapons include: Powerful wrist-mounted flamethrowers. Can also be found on ankles, knees, and elbows. They can independently be switched to a jet mode to allow flight. Wrist-mounted and optical death rays. These beams of directed energy are capable of melting through steel walls in a matter of seconds. They are hot. Grenade Launchers located in forearms. There are multiple different types of grenades available, including fragmentation, incendiary, smoke (flammable, poisen-laden), nano (releases a swarm of flying carniverous nono-bots), and remote-detonaded sticky bombs.

Indomitable Will: The Toaster has one goal. He will not stop until he achieves it. He is hell-bent of burning the world to the ground, and nothing can stop this. He would go to hell and back to see one charred body knowing he was responsible for it. He will not be rehabilitated. He will not ever change. He cannot resist the urge to kill, to burn the world. His rage burns almost as hot as your flesh.