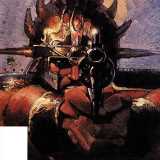 Proelio stood staring with malevolence at his 'trainer'. Bilis beckoned him to attack. He flew at the son of Deimos, swinging his fists rapidly, aiming for cheek, temple and throat with incredible speed. Bilis leaned out of the way of the first punch, sidestepped the second, and caught the third. He flipped his uncle high into the air, and he landed with a crash. Proelio flipped onto his feet and charged his nephew with a rush of power, a roar of anger escaping his lips. Bilis reached past his swinging arms, grabbed the back of his collar and sent him over one foot, sending him rolling clear across the field. The son of War was up instantly, running at Bilis with his patented double punch, kick combo. It was aimed at the ears, trying to disorient Bilis, and then knock him down. Bilis blocked the hands, tanked the kick, and slapped Proelio in his own ears. Proelio crumpled like a cardboard box as his world became dark. Bilis frowned. He hadn't meant to hit his uncle that hard. His rage was a powerful emotion. And yet, something else in there too...

A number of hours later, Proelio awoke to Bilis' boot poking him in the side. "Uncle. You aren't going to learn anything lying on your back." The voice burned in his head. Proelio jumped to his feet.

"Nothing you'd understand, boy." He snapped back, letting loose a powerful punch. Bilis stopped it in mid-flight. There was a crack as at least one knuckle broke. How many exactly, and in whose hand, was uncertain, as both of their arms quivered.

"Please refrain from trying to strike me, uncle. Your rage is most potent, and I would be terribly grieved if one of my blows were to accidentally strike you down." Proelio pulled his hand back. "Why couldn't you hit me?" Bilis asked.

"Stronger, faster, better reaction time." Proelio mentioned with a flippant gesture of one hand. "I am less than even you, half-god." He growled.

"Perhaps. Or perhaps you are merely different." Bilis mentioned. "I will teach you the strength of anger. In return, you will master your mother's gift." He ordered. He knew a lot about Proelio. "Or you shall face the gods alone, and I will not aid you." Proelio nodded, then spun, sword flashing in his hand as he faced the newcomer, who wore a mace at her belt. The stranger froze, but Proelio knew who it was at once.

"Daughter of Phobos." He remarked, the sword disappearing once more. "What are you doing here?" He asked, slowly returning to a relaxed state.

"Just visiting my cousin." She replied, then disappeared. Proelio felt a finger trace a line up one arm, across his shoulders, and around his neck. "Besides." She purred. "You think I'm going to miss you two stallions going at it?" He growled, and she released him. "I'm just curious about what kind of whirlwind daddy and the family have reaped." She said, looking hurt.

"They aren't in any trouble, dearest cousin." Bilis remarked. "This mortal cannot even touch me." Something inside Proelio snapped. Without warning, he shot across the field. He drew no weapon. He didn't need to. Bilis didn't see him coming, all he saw was a blur of dark hair, weathered skin, and wild rage. Then he felt a thousand punches strike him like a meteor storm. He couldn't defend, it was as if all his instincts had shut down as the son of War mercilessly pelted him with blows. After a few minutes, Bilis fell. Proelio managed to regain enough of his control to not beat him to death. He panted, his heart pounding in his chest, his entire body coated in sweat, his biceps pulsing. "This...this is what we need..." Bilis remarked. "Draw from your own anger, it's like a never ending battery of infinite power." Bilis smirked. For a short time, Proelio had tapped into the speed of Mercury, the strength of Mars, the combat abilities of Bellona, Minerva, Deimos and Mars combined.

Proelio and Bilis had drawn a large octagon on the ground. Bilis now needed his gauntlets of strength to be able to do any damage to Proelio. Proelio had removed his jerkin, although he retained his bracers that encircled his forearms. The daughter of Phobos held her mace high. The sun glinted off of its yellow-orange aura. She dropped the mace, and as it hit the ground with a THUNK! the match began. Bilis moved, fast.

But not fast enough.

Proelio darted forward, savaging Bilis with right hooks and left straights, high overhand jabs and rabbit punches to the abdomen, dodging and weaving through the child of Anger's most creative offense or defense, then seized him by the forearms. Looking into Bilis' eyes, Proelio rolled back, and extended his legs. Deumos' son flew through the air, spinning, arced perfectly, and came down with a crash by the large pool. He stood instantly, staring at Proelio. "Bring it."

Proelio didn't move. He rolled to his feet, and stayed where he was. "You told me to train my water nymph powers. Goodbye, Bilis." He remarked. Billis noticed the small, almost inconsequential series of gestures that his uncle had finished performing as he spoke. His mouth opened - to ask a question, more likely than not. It would never be known, for his words were drowned out by the sudden rush of water that soaked him. The stream was under intense pressure, it knocked him for several hundred feet and pinned him against a rock. When the onslaught of hydrokinesis had stopped, the soaked demi-god collapsed. Phobos' child raised her mace. An almost unnoticeable sound, and ran at him.

"YOU B@ST@RD!" She sreamed, swinging the mace at the small of his back. He half-turned, seized the Mace of Terror in one hand and her throat in the other. He hoisted her up to his level. This took her feet some several inches off of the floor.

"I see your father in your eyes." Proelio said cheerfully. "Relax. Bilis isn't dead. He merely knows the wrath of a god." He dropped the girl, who was borne straight to the floor not merely by the surprise of the act, but also by the weight of her weapon and turned to Bilis, who soddenly climbed to his feet. "I am ready?" Proelio asked. Bilis tried to respond, but merely spat out a mouthful of water and nodded. Proelio turned and began to walk away.

"I need to get changed." Bilis remarked, walking in the opposite direction from Proelio, towards his car.

"I can help with that." The daughter of Phobos replied seductively, and ran after him. They spared their uncle not a second glance.

Proelio had plans for the gods, but one man cannot wage a war alone. He must recruit allies to his cause. It was because of this he was here, in the mighty land of Iberia, and sitting across from the mysterious man in the shadows before him. "So, Mister Impero, that is my plan. Can I count on your support?" He asked grimly.

He had tracked down a few allies for his war. One was an Olympian whom had proven herself on the battlefield many times in the past. "It is a campaign that will be spoken of for ages to come." He crossed his arms, ensuring her that this was not open for debate.

Each time, each person, a different story, essentially the same question. Another had been a Shadow herself. "Tis to bring great credit to one's name, to kill a god." He mentioned offhand. "T'would benefit us both." He added, raising an eyebrow.

A number of people he approached, utilising all the tools he could lay his hands on to locate useful allies. One visit to Champions Island, he had spread the word to a young hero, aspiring to be something better. "You don't have to accept my offer, but remember, all I want you to do...is run." He smiled.

It was easy to locate many of them, harder to convince them. The Tenebrasque In, he did not approach. The Shadows, should they join him, would be instrumental to his success. As such, he had offered them all an open hand into his private war. He would not force them if they declined, but the Thirteenth Legion, that was his. He could drive them to the gates of Tartarus, perhaps beyond. That gave him one almost definite ally. The Lord Johnathan, champion of the Ordo Astartes. In addition, he knew deep in his heart that there was one woman who would join the fight regardless of his opinion.

The Calm Before the Storm

Proelio looked up, his red eyes trained on the sky as he strode into a small shop. The young man looked into Proelio's eyes for a second, then tried to run out through the back room. Proelio was on him in an instant, pulling him back with one hand. "Where are you going, son of Deimos?" He spoke in Latin, knowing the man would understand perfectly. The two stared at each other for a moment, Proelio's fist pulled back in order to deliver a powerful punch, then the man pulled himself free, walked to the door, locked it, and flipped the sign to 'Closed'. "I just want to talk." Proelio said. The son of the god of rage said nothing, and made Proelio follow him into the back room, then up a narrow flight of stairs.

They sat for the longest time staring into each others eyes, unblinking. Then the son of Deimos, one Bilis by name, broke eye contact. "You are more than a demi-god. More than most gods, in fact." He spoke in accented English. "Why are you here?" His head was tilted in interested bewilderment. Proelio placed a yellowing piece of paper on the desk. It showed two men grappling, but one seemed to be growing bigger under his opponent's crushing headlock. Bilis looked into Proelio's eyes. They glowed ominously. "You want to amplify your power through anger?" He asked.

"That's right, son of Deimos. And you will teach me how." It was not a question, nor a command, it was simply a sort of forecast. Bilis nodded. "Very good." Proelio smiled.