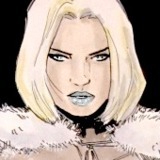 Biography: Heinrich was born in Germany in 1845. He studied biology and chemistry at Oxford University in England and became fascinated with the works of Charles Darwin and began studying genetics and heredity himself trying to create the next stage in evolution, forcing the hand of Natural Selection. His research into breeding, surgical alteration, and the like were considered mad science by his fellows, and he was ostracized by the scientific community. It was in this dire time that he met the mutant Jacque Quentin (Mister Q) and his half-brother, a lich named Gregory Rėza (Rezurrection). Q found his research promising offered aid to his studies, Gregory offering his own contributions from the arcane.

But studies needed subjects. He joined the Nazi party and aided their efforts in defining the Aryan race and experimented on inmates of several concentration camps during the Holocaust. He was killed in a raid upon one of his labs in 1944. His work on the brink of breakthrough, he was resurrected by Gregory as a ghoul, an undead creature whose body is sustained by necromantic magic and clockwork.

A new lab was founded in Geneva, Switzerland called YOUgenics, funded primarily by Q. In 1950, the team of scientist under Heinrich had succeeded in creating the first of a series of experiments called the ALEX project. There have been hundreds of attempts since, only some surviving the genetic splicing, mystical tampering, and the like.

Notes by Dr. Genetix: The House of Q