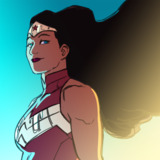 Pro-life. Abortion is murder. I only understand in cases where the child would be un-viable, or if the mothers life is in danger.

@eredin12: that's some weird low-balling. It gives me the impression that you haven't actually read most of the comics you're using scans from. The Deathstroke scans in particular are really silly to post because they're are clear cases of bad writing, or you not knowing the context of said scans.

The one where WW fights DS in a dress is just bad writing, and doesn't matter. She stomped him in a few moves afterwards, and wasn't even trying to hurt him (breaking a few of his ribs in the process with a casual punch). It's also a 28 year comic from the Golden Age era of DC where characters weren't as powerful. Are you seriously going to argue that Deathstroke is comparable to WW when she regulary fights power-houses like Powergirl, Superman, and Supergirl?

The other fight is just you lacking the context. That version of Deathstroke was being enhanced by the Godkillers which are enough to put him on par with the likes of Superman, and Wonder Woman. It literally states that he's using the Godkillers in the very image you posted. It doesn't help that WW was holding back, and just wanted to talk Slade down. She blitzed him a few panels earlier, and was casually throwing him around.

The other showings are, once again, just really weird examples of low-balling. The car example seems like it's in really bad faith because were talking about the same character who's survived an assault from the Flash, and a punch from a blood-lusted Superman that sent her from the sun to the Earth.

The scan with Superman, and all the villains is also out of context. That isn't the normal version of Earth. It's the core of the multiverse. Not only that, but Superman is depowered from being used to power the Earth's sun. On top of that, this is the same writer who had a weakened Superman shatter a planet by jumping off it in the exact same story arc.

Yikes. Some of you battle board guy are cringe. Imagine being this obssesed with the power-levels of fictional characters that you feel the need to insult/making fun of people for simplying having a different opinion. Some of the post in this thread read as if they were written by someone with the mentality of a 12 year old.

Dumb. I don't get why DC keeps trying to one up itself with these cosmic villains, and multiverse nding threats.

DC is the only CB company that's really holding my interest RN. I'm always gonna read Superman, and the DCeased stuff is... Interesting. I sometimes dive into the Dark Metal stuff to see how dumb it's gotten.

I don't know much about Composite Superman, but based on the small amout of research I did it sounds like he'd demolish Sentry. All of the LoSH's powers (invisibility, phasing, can make clones of himself, extend his body, manipulate matter, telepathy, etc...), and apparently he can easily overpower Pre-Crisis Superman. I don't know anything about Sentry, but he'd have to be stacked to overcome CS.

@phisigmatau: @the_man_with_questions: There's a new Marvel Zombies mini but I doubt it is connected to this as that isbstill going on.

It can't be the old Marvel Zombies world as almost everyone is basically dead in the entire universe besides a few humans on Earth.

I think it is likely just an alternate future to 616 where heroes became zombies and not the actual Marvel Zombies world but IDK. A new version of MZ, I mean.

I'm pretty sure that comic has been dead for several months.

I don't read Thor comics so I'm confused as to what that panel is suppose to represent. To me it looks like Thanos is rolling up with an army of Marvel Zombies.