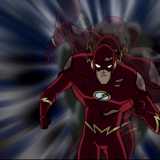 Iron Man and Thor are in the air against Multiplex, Cpt Cold, Reverse Flash, and The Mist.

Iron Man would have to defeat the Mist in order for his team have a shot. If he does he could also potentially take out Multiplex and or Capt Cold.

The Real problem is reverse flash, he is on the ground while Thor and Iron Man may be in the air. If they have to fight to the death, then advantage Reverse Flash because they would have to get close to hit him.

maybe it was an error when they updated the site. I got the same thing.

For Barry I would have also included Blackest Night: the Flash 3 (blue lantern barry).

I think this will be interesting. I would like to see more of her character.

I haven't seen this actor, but they did get someone much older than the 12-14 year old in the comics. Which should help the depiction of the character. I do hope wally is a little lighter character than barry just so they can have an interesting dynamic. This actor appears to be close in age to gustin-so maybe instead of an uncle/nephew mentorship it will be closer to a brother/older brother mentorship-which I think could work great for these characters.

I hope that the legacy of these characters is not ignored. Barry is the groundbreaker as the flash and Wally should be an extension of Barry's legacy and have the full potential to do everything that a flash could do. I'm excited for season two and I think these showrunners have proven so far they can produce great characters.

I've heard all of them, but I will rank the ones I can remember off the top of my head. Not counting Dee Bradley Baker-cause he had one laugh in Son of Batman (if I remember correctly)

Brett Spiner- didn't love his but it was interesting and did hit the young justice tone.

I love the energy Hamill brings to the joker. This is a win for me.

I think it would be very interesting to see Oliver running for office.

Slight difference but I'm glad they have the white logo. I think its an improvement and the picture looks sharp.

another easter egg they are bringing into the show. it is interesting how many easter eggs they have incorporated into the cw-tv universe.