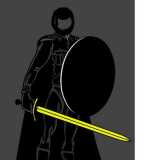 The creator of The Black Warrior was born in 1964 as the son of a schoolteacher and a nurse, both of whom eventually disowned him because he was not of perfectly sound mind. Growing up friendless, he had no companions other than books which the schoolteacher had brought into the house.

In 1977, the creator's hold on reality failed him. He did not recover it for six full years. By 1983, when he recovered it, his parents's feelings for him had changed.

They permanently estranged themselves from him in the spring of 1986. In 2009, they were both killed in an automobile accident without ever reconciling with him.

Since then, he has been a scavenging, monologue-prone caricature of a man in search of an identity that was never his. He suspects that his real name may be Parker Gabriel, and he is proceeding upon that basis of assumption.