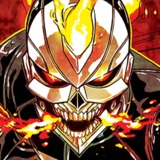 A gun-for-hire. Mercenary works only for thrills 'n kills.

Slightly unstable and unpredictable, he is calm and collected, but unhinged.

Regeneration: The Mercenary's greatest asset is his ability to heal from any wound or injury inflicted upon his body within seconds or, if it is more severe, minutes. He has been seen regenerating from unbelievable things such as decapitation and has even been witnessed sprouting new limbs minutes after they have been disposed of.

Teleportation: The Mercenary can teleport himself and up to two more people to distance's as far as half a kilometre. He can only teleport others upon having direct contact with them. The longer the distance travelled the longer the duration of time until he can repeat the feat.

Marksmanship: Having trained with most weapons known to man and perfected their use, he is renowned for his skill with snipers, having performed feats such as a mobile 500 meter head shot.

Swordsmanship: Easily one of his greatest assets, the Mercenary is infamous for his ancient broadsword and the prowess with which he utilizes it. He is fluent with almost all forms of blades, from wakizashi's to katana's to longsword, being able to use them as an extension of his own body.

Enhanced Strength: He packs a punch that could momentarily stun an enraged rhinoceros. Has been witnessed turning cars over with minimum difficulty. Often tears limbs off of his targets using nothing but his bare hands.

Enhanced Speed: With speed easily trumping any Olympic runners past and present, he has had bursts of speed where he has caught up to vehicles moving at full throttle. Once conditioned himself by running alongside African cheetah's, managing to keep up with them at full pace for more than a few minutes.

Enhanced Reflexes and Senses: Instantaneous bodily reactions that enable him to perform wonders such as point blank bullet evasion, lightning fast hand-to-hand combat counter-attacks, and precise deflection of projectiles with his broadsword. His sense of smell has allowed him to pick up the scent of a target from hundreds of meters away, and his eyesight is so keen that he is able to pick out a single face from thousands of different individuals and when focused, make out objects from more than 800 meters away. He has often tracked down targets in pitch black darkness using nothing but his sense of touch, feeling along for vibrations upon the floor or walls.

Photographic Reflexes: An ability that allows him to learn physical feats through simple observation, learning the fighting style of his opponent within seconds and being able to use it against them without missing a beat. A truly deadly asset that he has capitalized on, travelling the world and learning as much as he could.

Temperature: Intensely cold conditions have been known to slow down his healing factor and tighten his muscles, lessening the speed with which he moves. Whereas intense heat will only benefit him positively by heightening the rate of his healing factor. His body has proved resilient against fire.

Magic: The Mercenary's body has strange reactions to magic, often either increasing the effect of the spell cast upon him's severity tenfold, or completely nullifying it's effects. His gear is littered with his own magical trinkets that have been collected around the world to combat any magic that might affect him negatively. He has a great distaste for the dark arts.

Plasma: Beams or blasts or plasma have been known to inflict wounds which take longer for the assassin to recover from.

Boots: Comprised of light, tough fabric that covers up to just below the kneecap. Heels have inbuilt suspenders that absorb impact from large jumps or falls. Tip of boots have steel casing that are used to add force to actions such as kicking, giving a painfully solid feel to the Mercenary's roundhouses. Sole is lined by thin magnetic steel that can be used to walk up walls or stick to ceilings.

Gloves: Made up of the same material as the boots, they have magnetic metallic points at the end of the fingertips that can also be activated to stick to steel surfaces. The knuckles are cased in thick steel that increases the power of the Mercenary's punches tenfold. Each index finger has an inbuilt laser that is used to cut open small openings in solid surfaces, and often to split a target's head in half.

Gauntlets: These are large rings around the Mercenary's forearm extensors, a technological phenomenon that has thousands of uses and tricks. They can fire small missiles, release large coils of crackling electricity, and even allow the Mercenary to tap into or disrupt frequencies.

Utility Belt: Very much like all the other utility belts utilized by seemingly every assassin in existence, this handy piece of gear withholds numerous trinkets. Bombs, communicators, hacking devices, magical rocks, daggers and knives, handguns, nunchucks, rope . . . In all honesty the Mercenary carries everything in his utility belt. Name it, he's got it. I'm too lazy and uncreative to write it all out.

Weapons: Along with his signature Broadsword, the Lord of Life carries two wakizashi's, a katana, numerous knives and daggers, bombs of all assortments, a sniper-rifle, a grenade launcher, concussion blasters, and two Mercers (complex weapons about the size of a handgun).