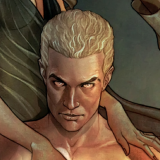 The dark secrets. A team concept.

I know a supernatural team has been attempted before, twice in the past year to be exact. And they have both faded rather quickly, why? Well there were many reasons. Mostly being that the leaders faded away or enough of the members did the same. Now I assure you, I as the leader of this team would not fade or vanish (at least not without any sort of warning). The secondary thing that keeps a team healthy from what I have learned is that the team MUST MUST MUST interact with eachother almost daily, a house full of lone wolves just wont happen. Perhaps the greatest example is my time as Creed on the Harbingers, that really showed that building relationships is half of the fun of being on a team :D.

The dark secrets team would be comprised of a certain amount of members dedicated to dealing with both supernatural and mutant threats, although supernatural is their main focus. As for a roster and specifications? You DON'T need to be a supernatural character if you don't want to! Half the fun is mixing different races and mutants and supernatural beings with eachother and see what sort of shenanigans ensue. One thing that is rather important to note is that your character must have a morality that would except killing humans and just killing in general. Can't really have someone that is NOT ok with the leader and possibly other members that need to drink the blood of humans.

Just a concept at this point.

I am just getting this thing started, hell it may never see completion but I hope there can be something from this idea. So if your interested in being involved in the development and a place on the team, post on here, PM me, wall post me or whatever.