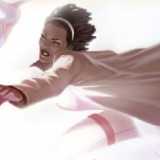 MARVEL GAMES OF THE EARLY YEARS

A NEW ADDITION TO MY MARVEL COLLECTION!

The Dazzler for Marvel Ultimate Alliance

KICKIN IT WITH MARVEL

Where are you Monica Rambeau?

She is one of the most powerful heroines in the Marvel Universe. She has the ability to turn herself into any form of energy from the electromagnetic spectrum: Light, Various forms of raditation (Gamma Rays, Cosmic Ray,etc...),Microwaves, Radio wave, ultra-violet rays, etc.... She can, in her light form, travel at the speed of light and/or turn herself into a focused laser beam. She can fire off energy blast of various strength, and can absorb various forms of energy. If you think about it, she has the capability to take out the Hulk by herself ( a laser beam thru his eye and into his brain, instant lobotomy). Under the guidance of former Avengers's writer, and her creator, Roger Stern, she became a member of that team, and with the confidence shown her by Captain America, came to lead the team, standing up to such head-strong members such as Hercules, Namor, and Thor.

Unfortunately, over the years, she has been under used, and under appreciated. A victim of comic book companies creating a powerful character, especially a power minority character who is not a stereotype, and not knowing what to do with them. I have to give Marvel credit. In the past few years, they have given their minority character the spotlight: Luke Cage in the Avengers/Pulse/Alias/Daredevil, The Black Panther back in his own book again, A new White Tiger, Patriot, Hulkling and Wicca of Young Avengers, Storm and Bishop in X-men, and let's not forget Storm's marriage to Black Panther.

Recently, Mr. Warren Ellis brought back one of my favorites, Miss Monica Rambeau aka Captain Marvel II aka Photon aka Pulsar. I know the book she's in, NEXTWAVE, is suppose to be a quirkly book, but I was hoping her back story was kept intact. Instead she's shown having her abilities as a child but according to Amazing Spider-Man Annual #16 (1982) that is untrue. Monica was treated well within it's pages, and Mr. Ellis explores all the aspects of her abilities and personality. Also, in the Black Panther series by Reginald Hudlin, Monica Rambeau is recruited by the Black Panther to fend off a vampire outbreak in post-Katrina New Orleans, as part of an all-black super hero team comprising Luke Cage, Blade, Black Panther and Brother Voodoo.

She played a role in the the "Civil War" crossover, Monica is a member of Captain America's Secret Avengers, where she again works closely with T'Challa. After the Civil War ended, Monica and some of the other Nextwave members appear on the solicited cover to Avengers: The Initiative. Her run with Nextwave is over and this allows for further character development, possibly including a move back to her roots among the Avengers. With there only bring two female characters in the New Avengers, IMO there is a need for more female representation on that team. In the future I'm hoping that Monica is treated well within Marvel's pages again. Excelsior!