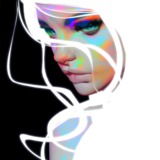 • History/Origins: In the aftermath of WWII and the nuclear crisis with the USSR, a shaken US military, desperate for a means to enhance its armies and weaponry, turned to an unconventional group of scientists called Nyte. This group—origins unknown, but certainly not entirely human—began training a group of children to be raised as super soldiers—assassins, spies, agents, diplomats, world leaders—who would begin shaping the world’s history. The US military thought it was for their benefit, but Nyte’s plans were much bigger and much more sinister…

Given to the project as a child, (codename) Sylver was molded into the perfect agent of destruction and espionage. Overtime, she, like the others, was outfitted with cybernetic parts, and soon, she was more machine than human. Her strength was 50x better than the best bodybuilder; her senses were all superhuman and unparalleled in accuracy; her intelligence and learning capabilities surpassed any human genius’…But her emotions and sense of identity were obliterated. Perhaps most disturbing of all was the signature ability of her group of soldiers—dubbed Project Vampire: to fuel her many cybernetic abilities, regenerative capabilities, and seemingly perpetual youth, Vampires could absorb biologic life, the most raw of which was through sentient beings’ blood.

Late in the night, when time traded the 20th century for the 21st, an explosion rocked the Nyte mountain stronghold, seemingly wiping out all life for miles around. A bloodied and sparking Sylver ran from the scene into the cold night, and she’s been running ever since. Why did she run? Why did she destroy her home? Why does Nyte hunt her? And what is her mission now?

We’ll just have to see.