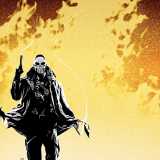 It's good. Im up to my arse in work so I might take a while to get back to you, but this seems like a perfect time for other people to get involved if they wanted to.

Is there any in universe explanations for why everything changes appearence? Or are bioware just like 'lol, disregard everything that we did before"?

Dawn came slowly, pink light seeping over the horizon to stain the sky a wash of colours. Jack rubbed at his eyes, trying to get the grainy feeling out of them but only succeeding at forcing it deeper. He was sitting in a folding lawn chair next to a fountain in the food court. Although the pump was off, the water inside was far too chlorinated to be of any use to anyone and so it had been left untouched despite the increasingly bleak supply situation. Now Jack was sitting next to it with a rod in his hand, letting the tackle float dejectedly in the three inches of brackish sludge left. He had been at it all night.

Jack was coming out of the other side of middle age, his thin face speckled with the beginnings of a salt and pepper beard. It gave him a haunted, hungry look that belied his otherwise nondescript appearance. Idly, he scratched at his chest where he'd been shot many years ago, wondering what the new day would bring.

The other survivors came awake slowly, moving around tending to their duty's whether they be in patrolling or cooking or some personal errand. With the situation as it was, the chain of command was rather informal and only Kingsley Kaine could order anyone around with any degree of authority. Jack had the feeling that he was as lost as the rest of them, but did a better job of hiding it. Whatever the truth, he was happy that someone had taken charge.

He was snapped out of his reverie by the sound of running feet. As the old drifter turned in his seat half a dozen children came into view, all of them carrying plates of food. In a few moments they surrounded him, sitting cross-legged and breathless in a rough semi circle. The eldest child stepped forward and presented him with a plate of food reverently. Jack smiled warmly and took the plate. He wasn’t hungry but the giving of food was part of the ritual which had developed over the long months of incarceration in the the locked down mall.

“I suppose you will be wanting a story then?”

The crowd nodded, eyes big in their heads and faces split with grins. The next words were also part of the ritual and they knew them off by heart, but it wouldn’t be the same if he didn’t say them.

And he did. Jack had lived a long, full life and he had seen many things. He told them of an Emperor of a great land to the East, who had fought many battles and won them all. But finally in his old age, he had grown tired of fighting. So to protect his people he had built a great wall, miles high, that stretched around his entire kingdom. Upon his death, for this king lived many years ago, his people had decided that they didn’t need money, or governments. So they lived in harmony with each other and were defended from all those who would wish them harm by the wall that their king had built. The implication was there and a fair few of the older children seemed to get it, that not even the Walkers could penetrate such a kingdom. Finally, when he was done he allowed the children to ask questions. But only one little girl put her hand up.

“Why are you fishing in a fountain, you'll never catch anything?”

Jack smiled at that.

“I'm not fishing to catch something. I'm fishing because it brings me a feeling of peace and because nobody will ever fish here again. If we let our situation effect who we are then the Walkers win and we become like them. If you will not do what you love out of fear, then you are already dead.”

That seemed to please the children and then began to disperse. Going to help their parents or play in the myriad of shops left abandoned. Jack felt an urge to do the same. Standing, he stretched and looked around for anyone who needed a hand.

Sounds good to me, I'll post tomorrow. Just need to get some sleep now.

Well I cant find my old post. Is it worth me writing it up again?

I think I still have a post for this saved somewhere. Id be totally up for reviving it if other folks were

All deceased or up and walking as far as he knows.

Calm, measured and introspective but not a loner. A bit of a dreamer.

Drifter before the dead rose, making his way by doing odd jobs. Luckily he was inside the mall when it was locked down rather than being out in the car park. He adapted well to life in the mall as it wasn’t all that different from his life before. Now he has decided that he will tell stories in order to keep peoples spirits up and sees himself as the chronicler of what is happening. He has a revolver but it a terrible shot with it and only has one bullet left anyway, the rest having been used when the wounded turned in the first few days of imprisonment.

Storyteller, good with his hands.

Alright, there he is. Do I need to make a new profile or can I just post with this one?

Awesome socks, I'll get to work on a character