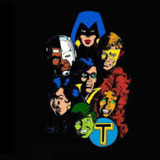 With Teen Titans Rebirth going on right now I can't help but notice that the interactions between Damian Wayne and the classic members from the Wolfman-Perez run of the "New Teen Titans" are a bit awkward. Cyborg has moved on to the Justice League and I think it's time that some of the classic characters move on as well, not necessarily to the Justice League, but onto a team for older heroes. Personally, I liked the cast from 2008-2011 run of the Titans a lot so this list is largely based on that lineup of the Titans.