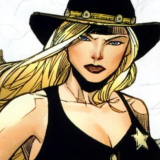 Sue and her brother Johnny had a pretty normal childhood until their mother died in a car accident. Their father, Dr. Franklin Storm who was a doctor, could not save her and was not able to cope with the loss. As a result he became an alcoholic and a gambler. He got into a scuffle with a loan shark and accidentally killed him, and was later charged with murder, sending him to jail. At this point Sue was forced to become both mother and sister to Johnny, caring for her brother throughout most their childhood, causing Sue to mature far earlier than most children her age. Eventually, the Storm siblings moved in with their aunt who owned a boarding house, and it was there where she would meet the man who would shape her life.

Sue met and fell for Reed Richards (Mr. Fantastic ), a tenant of her aunt's. Richards was a brilliant scientist who was attending Columbia University at the time of his first meeting with the 12 year old girl who would later become his teammate and wife.

Many years passed before Sue and Reed crossed paths again. In an attempt to become an actress the young Susan went to California to pursue acting and met up with Reed once again. Reed was taken by the girl Susan had become and shortly afterward began dating.