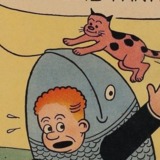 Hooray, sometime very soon I'll be completing all the Bessys that can be reasonably found (it only took me around six years to do it) and I should have the Zacks done by next month.

And for publishers, I'll still be doing Viz, Antarctic, and Tokyopop Gmbh. I hope to go back to Fantagraphics and fill in at least the authors

This villain has the worst method of being defeated ... ever

Ugh, someone just punched me in the 47 down
As for being a lame villain, he's pretty high up there. Because nobody demanded it, he's a pink robot/crossword puzzle hybrid, who can only be defeated by someone getting a pencil and solving him! (If you go to Fun and Games #9 you'll see Hulk futilely hitting him on the head). If I were him, I'd change my clues to the likes of "Mxyztplk's half cousin's dog's name" "A village in India" "what someone who's babbling might say" or just blast any writing implement that comes near me.

Thanks for all the well wishes on hitting 100 K. I've been busy lately : doing two jobs at work (monograph receiving and cataloging electronic resources), and getting a good start on my novel (a "realistic fantasy" where there's magic and technology set at the present time). So, I've been busy

I'm trying to submit here, but its slowed way down. I'll try to get through the comments and PM's too.

Lots of good stuff next week

And I get paid (and I got my fed. income tax)

The Superman titles starring Superman are done (at least to my satisfaction, I'm sure there are things missing). Should finish Lois Lane this month. Still have a while in Jimmy Olsen, Superboy, and World's Finest

Here are comics that I'm doing / want to do

Detective Comics (filled in skeletal info : thanks to whoever did the covers)

Sam & Max Freelance Police (Did some)

Savage Sword of Conan (Some done, someone may have done more)

Simpsons and related Comics (did most titles, 50+ done of main series)

Other indie titles (any suggestions?)

Look what Superhero I am!

Look at my match!

I tried the lover test and I got Kitty Pryde!

My number of points equals the number of users (4961) just now.