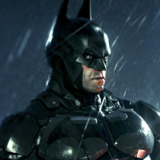 Protocol 10 will commence in 10 hours

1. First and foremost, Batman is a strategic genius, which is the most important thing in a battle like this. With over 10 years of in field experience, and even more years of study and training, Batman boasts a big advantage in regard to strategy and battle IQ. He has faced dozens of villains with varying abilities in his time, and is stated to have genius-level intellect.

2. Batman has fought an opponent with similar manuevarability to Goblin, in Firefly. The location for this fight is the same as in the linked video. Batman has plenty of obstructions to take cover behind, and smoke bombs for additional confusion. Aswell as this, Batman is a master of Ninjutsu, and has a great capacity for stealth and general theatrics (example of disappearing act). To add on to this too, Batman generally has great evasive skills, which are displayed neatly in the linked fight at 4:00, where Batman evades a handful of small explosives thrown by Firefly. Batman has an "arsenal of gadgets, vehicles, and advanced technology" at his disposal (except vehicles in this battle), which will also be of great assistance against Goblin. Batarangs, Glue Grenades and the Batclaw are a trio of gadgets that will be great for targeting Goblin at range and pulling him in while he's stunned. Allowing Bruce to beat him down in CQC.

3. Green Goblin is not averse to close quarters combat, once he realises that he's not at advantage at range, because he's less adaptable, less well coordinated and less versatile in terms of technology, he'll probably close in and attempt to beat him down in melee. However, what Goblin has actually done, is doom himself to be beat down by a master martial artist. Batman is too fast and skilled in combat to the point where Norman won't land a strike on him, below is a list of his combat accolades/feats;

4. Due to Green Goblin's enhancements, there is the question of how Batman deals with the gap in physicality. It's quite simple, Bruce wears a suit of armour, it being an array of titanium armor plates, woven together with fabric to protect Bruce while allowing him full flexibility. With this armour, he's been able to withstand attacks from many superhumans, such as Bane, who he took repeated hits from. For reference, Bane is strong enough to throw a car 100 feet away, and could even cause a large room with thick concrete walls / roofing to collapse by clashing into the walls a few times (see how the room collapses at the end of the boss due to the damage caused by Bane's charges into the walls. This line of scaling establishes that Batman can take a good deal of punishment from Green Goblin, should he need to.

As for Green Goblin's durability and putting him down, it shouldn't be a massive problem. Bruce will beat him down the same way he did Killer Croc, casually evading all attacks and gradually wearing him down. For reference, Killer Croc can no sell sniper rounds and shrug off building sized explosions. If this alone is not enough, Batman can drop a smoke bomb, and amidst the confusion spray explosive gel on his fists to greatly enhance the power of his punches (it was enough to one shot a Bane level opponent). Btw, Batman will have full awareness in the smoke, due to Detective Vision.

Batman has proven himself to be great at dealing with range when he fought an opponent with similar manuevarability to Goblin (Firefly), he can quickly evade Pumpkin Bombs and such the same way he did with Firefly's dozens of mini explosives (Goblin only has a small few Pumpkin Bombs too). Using his Grapple Gun, he can pull in Goblin, then beat him down in close range. Batman has a clear W in close range because he's far more skilled, has the armor to withstand some hits, and hits hard enough to beat him down over time, but also has gadgets to aid him, such as smoke bombs which will hinder Goblin's vision (not Bruce's though due to detective vision) and explosive gel which he can use for devastating impacts.

I haven't seen The Bad Batch Pilot yet but Grievous wrecks based on TCW S7 only.

TDK, not a big LOTR fan. I'd take any film from TDK Trilogy over any of the LOTR Trilogy.

#5  Edited By subline
8 months ago

Obviously biased thread given the poll options. Omni-Man isn't a better character, at least not yet (I have no knowledge on the comics though, only seen the show), maybe in a few seasons he will be, but for now Superman is definitely better.

Homelander is a better character than Superman though, imo. Haven't read The Boys comics either though btw.

Can't agree with this but it's entirely subjective anyway.