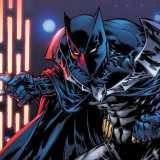 I believe Batwing can take her.Both of them.

I think Toxin can win.

@stronger: Mixed martial arts (MMA), is a full contactcombat sport that allows the use of both striking and grappling techniques, both standing and on the ground, from a variety of other combat sports.

MMA have rules, i have never being in a fight with rules.

I used to have a friend that used to be a MMA guy, he destroyed his arm in a street fight, the reason he used many of the MMA moves he knew, he learn the hard way the floor was harder that the Ring, had no rules and what you have to look in real life is to survive, not to ko or make the other guy tap out.

This was based now Arkham Batman being reallistic, thing he is not, in Bourne being reallistic, thing he is not, this is about this fake pseudo reallism that make no sense, it would never work to fight like this guys, if you are an spy they will teach you to run away from fights, this is called tactical withdrawal, spies like Bourne would dogde fights and then find the best place to have them and get weapons to win, and i dont mean guns or knifes.

Jumping dont work, neither high kicks or kicks combos, sure fake pseudo reallism looks more real that normal martial arts movies, but that dont change is fake and is not reallistic.

There is no point in going foward, since you like fake pseudo reallism and you will defend this dont matter what.

Maybe your friend wasn't as good as he thought.

The last thing I have to say.You can't call moves (found in martial arts like Judo,Combat Hapkido,Ju-Jitsu etc) that are used by paramilitairy units(British SAS,Navy Seals etc) non realistic, because they teach them how to win their fights.Not just how to fight.

Battle in Gotham City at night.

Winner via submission,restraint or K.O.

Herc has this if it's just h2h combat.

Hulk is able to match Thor and Juggernaut.