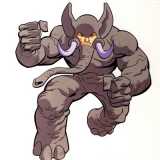 Out Of My Way! 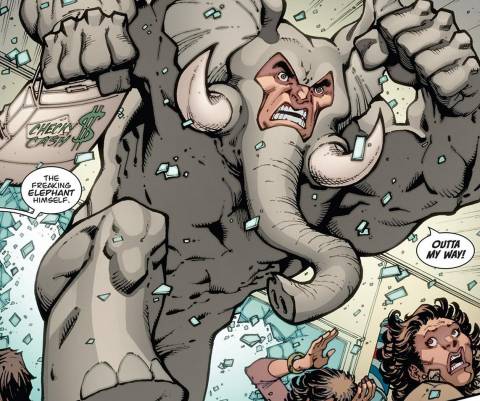 Evan "Almighty" Tombs was an up and coming boxer. He had the skills and he had the talent, but for him that wasn't enough. Driven to be the best he would do anything to get ahead including shady deals, cheep shots and other criminal activities. One of his more inventive cheats was the use of athletic enhancement drugs. Everyday he would literally pump gallons of them through his system, while always keeping an eye out for anything new. It was then he met a shady character, who referred to himself as "The Dealer" who was ready to offer him and him alone the one thing that could make all his dreams come true. The drug he was pushing was a rare mixture of Elephant DNA guaranteed to increase his strength, speed, and endurance far beyond any mortal man. For the next few weeks he lived off the new drug mixed with hours of training, and surely enough he began seeing a difference. He began packing on the weight and muscle while being able to tank any hits by the best boxers in the ring!

Unfortunately, what he failed to notice was his anger was slowly getting out of control, as well as his dependency on the drug. With every dose he took he wanted more, so one late night after buying some from "The Dealer" he followed him back to his home. With the use of his enhanced strength, he burst down the door, ran in, and began rough housing him for more of the drug. In fear for his life "The Dealer"quickly gave him all he had left. It was at that point Evan made a decision that would change his life forever! Against all warning, he injected every last drop into his veins., for what he thought would be the rush of his life.

But instead of the spike of adrenaline he was expecting, his body began to stretch and bubble. Soon a pair of ivory tusks protruded from under his chin, while at the same time a trunk grew between them. Next he grew over three inches taller while his body packed on muscles. Finally his skin broke out in thick patches of gray hide until he now resembled the perfect crossing between man and Elephant. He was more powerful than he ever dreamed of. In desperate need for more he grabbed "The Dealer" by his neck in order to threaten him, but instead crushed his wind pipe to dust, due to his newly over enhanced strength. In fear for his life he ran off into the night eventually making it to his apartment only a block away. It was there he began to calm down as well as clearing his thoughts, hoping he had out run the crime, only to notice his Elephant hide was fading away. Fearing the loss of his power, he ran to the bathroom in need for any of his other performance enhancements drugs, only to notice his tusk were reappearing. In time he learned, not only could he control the transformation, but the level of it's intensity. Because of this he vowed he would no longer be just average Evan Tombs, but instead the Steroid Stampeder.....STOMP!

- Stomp is immensely strong capable of easily lifting 100,000,000 tons over his head. The true limits of his strength has not been determined yet, but he has never met a object he could not lift or a barrier he could not break.

- Protruding from his chin are two nine inch tusks, that are not only indestructible but have tips that are sharper than blades. Upon thought he his able to launch them forward with a speed faster than a bullet and with perfect aim that he can explode or dissolve at will. Upon doing so he will immediately regrow two more, ready to launch out in seconds.

- With the aid of all the toxins in his body, he is able to breath through his nose a chemical with toxic effects from a simple knock out gas to acid poison.

- With the use of his trunk he can release a roar that is so deafening that it can incapacitate an individual for a time being and leave him defenseless.

- By use of his trunk he has the ablity to launch large objects like projectiles, with life threatening force and speed.

- Not his preferred source of travel, but with the use of the enormous muscles in his legs, he can jump miles in one leap and further after building up momentum.

- Due to his years of athletic training, mixed with his newly formed muscles, he is quite fast and agile. He is impressively light on his feat and can move around far above peak human abilities. Even with bullet catching reflexes and above. However when he starts running forward, and begins building up his speed he can reach up to breaking the sound barrier. But most important, the higher his adrenaline pushes him, the fast he can get, possible even faster than light!

- His Elephant hide, as well as his exposed face, is nearly impervious to all incoming attack known to mankind. His bones much like his tusk are unbreakable! However, should he be wounded by a magical or more powerful weapon, he has a highly advanced healing factor that heals even major wounds within seconds, including life threatening wounds. He could literately live with his heart in his hand.

- With enormous ears, eyes and a huge trunk, Evan sense of sight, smell and hearing have been increased to gigantic levels, with the ability to see, hear and smell things, miles away.

- Evan is no smarter than the average man. He managed to graduate from college with a major in liberal arts, but that was as far as he went. However, due to the Elephant DNA he now possess a superb memory. Although it could be used for more scholastic uses, Evan prefers to use it in combat. Shortly after watching an opponent's move and tactics, he begins to be able to predict their next move

- Due to all the chemicals pumping through his system, he has formed an immunity against all forms of poison, diseases, illnesses and drastic changes in temperature. Oddly enough by this same feature he can not be controlled mentally of forced to see illusions or even have his thoughts read and for some unknown reason he is immune to magic as well.

- Somehow through his metamorphism, Evan has been gifted with the ability to be immovable in the sense that he can no be lifted, levitated or even harmed. The only down side to this, is that in this state even he can not move.

- Stomps eminence strength, speed and endurance are all tied into his adrenaline. The more his adrenaline rises the more powerful he becomes. As to its limit it has not been discovered, but it could potentially be boundless allowing him to get stronger faster and more durable the longer the fight goes on.

Catch Phrase - Get Out Of My Way!

Powers While in Human Form

Due to his steroid treatment, even while not in Stomp form he still has many powers. He is incredibly strong able to lift over twenty tons with a skin density that can tank large caliber bullets. He is quite fast, capable of running over a mile in one minute with bullet dodging reflexes. As he is a trained professional boxer he is an incredible hand to hand fighter, able to not only read his opponent's moves while knowing just where to strike. Finally, as one of the worlds most renowned boxers, although temporarily banned, he is very very rich and is quite capable of affording whatever he wants!