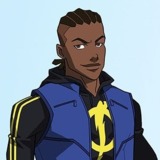 These FNGs in the battle forums are still thinking way too highly of themselves.

I plan on writing my own comic book series....

Me and a friend have been in talks about this for months now, ranging from what the story is going to be about, to what the main hero will wear, and loads of other things. It's actually harder than I thought it was. Writing a comic book story takes a lot of creativity, plus patience. I'm not trying to sound a like a professional, at all. Creativity is there, but patience seems to be lacking. I'm making it, though.

What I will say is that the story will feature a street-level crime fighter who is not only trying to be a hero in the city of Atlanta, but he also has an agenda of his own, dealing with women, college, the power he possesses, and the loyalty of his best friend. You can expect a martial arts tone to the story, as it will be heavily based on martial arts. As for the character, I won't reveal details yet, but just know that the character takes influence from both Black Panther and Iron Fist. This isn't the say that he's going to be an African super-soldier with S.H.I.E.L.D. Helicarrier-busting Chi powers and genius-level intellect with a technologically-advanced nation behind him. That would be pushing it, so don't expect any of that. But, just know that mystical concepts will be involved, dating back to Feudal Japan, possibly the Ryukyu Kingdom. Other concepts, like science fiction, a little criminology (no, he's not going to be Batman, but he will deal with the criminal element), and technology superior to anything we've come up with in reality. After all, that is how most comic books are, especially in both Marvel and DC. Plus, villains need a fighting chance, too.

Like I said earlier, I won't reveal much. But, I will show you this and let it marinate on you. This is just the gist of it. And, no. I didn't draw this.

Blogs Created:
1 blog
Most Commented blog:
I plan on writing my own comic book series....
Total Comments on blogs:
64 comments