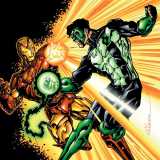 I want Billy Zane back

I loved the original Phantom movie. I've seen the pictures for the new Phantom series and I am less than impressed. At this point I just wish that they had just let the character be, and not made some half done update. The 96 Billy Zane movie was great, and by far is my favorite comic book movie. I feel like my love of the Phantom will soon be soured.

Is anyone else a big fan of this show? I've been watching it since season one and loving it the whole time. It's just fascinating.  The new season is shaping up to be the best yet, with 3 boats in total for Sea Shepard. Also if you have been reading the headlines you know all about the drama that is on its way for the Sea Shepard crew!

caught up on comic

I hate being behind on my comics

I'm so behind on new comics. With finals for my summer classes and everything the last two weeks I haven't really read much that wasn't for one of  my classes.  I hate to play catch up on a bunch of titles. My plan is to get all caught up by the end of the weekend.

What's the longest you have gone without reading a comic? (this includes however long you have quit comics entirely)

The bad habit you hate most

Mine is when people don't wait for other people to get off the elevator that has just opened instead they rush in and cause a jam. It's just rude.

What's the little bad habit that irks you the most?

So I just got done looking at the coverage for the next IPhone. I thought that maybe if it was good enough I would consider switching from my current provider (Verizon) to AT&T. My contract is up next month but I'm thinking that I'm gonna stick with Verizon and get the HTC Incredible.

Thoughts on the new IPhone?

What kind of phone do you have?

What's the next phone you are planning on getting?

I was looking through my Ipod yesterday and I noticed some of the more cringe worthy songs in my music collection. With the rise of the Ipod and other forms of digital music players, you can't hide your guilty pleasure music like in the old days with CD's. The embarrassing musical tastes I have are right there neatly alphabetized for the world to see. Everyone has a few songs or artists that are a little embarasing to be caught listening too.

A couple of mine are:
Michael Bolton
Brittney Spears
Nickelback

What TV show would you bring back from cancellation

My most of my favorite TV shows are not currently being made. I would love to see these shows back on the air.

In order of priority the shows I would like to see come back would be:
1. Babylon 5
2. Firefly
3. The recently canceled Law and Order

What Power Ranger would you choose to be

What's your favorite version of Batman?

What version of Batman is "your" Batman?  There are several main versions. The Animated Series Batman, the Kelly Jones Batman with his pointy long ears on the cowl, the new Dick Grayson Batman stylized by Frank Quietly, The Jim Lee Batman which is a lot like the animated series Batman in look, or God forbid....the 1960's campy Adam West Batman.

For me I will have to say that the "Animated Series Batman" as my favorite batman.  The Animated Series Batman was my first introduction to Batman, far before I ever got into comic books. I tuned into that show religiously when I was a little kid. He was for sure my starter drug into the world of comic books. And for that I will always have a special place in my heart for that Batman version.

Blogs Created:
20 blogs
Most Commented blog:
What TV show would you bring back from cancellation
Total Comments on blogs:
281 comments