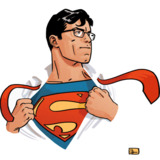 After reading some comments on another site, something has troubled by mind. DC's lack of faith in Superman. Superman has been constantly rebooted the last 20 years(Red/Blue,Superman 2000,Birthright,John's Action Comics/Secret Origin,New 52 and now Geoff Johns goes for a soft reboot AGAIN in his run on Superman although that's too early to tell). Ιn an attempt to "modernize" Superman, DC is constantly rebooting his universe and as a result Superman lacks:

And more importantly a stable reader-base. Yeah,yeah I know what are you gonna say, Superman is one of the most popular characters and "bla bla bla bla" and yet even here I can name more than a handful of users who can't even open a Superman title because of how lost and alienated they feel.DC is trying to appeal to the masses and ends up appealing to none.
The characters don't evolve, there is no natural progression, no vision. Just writers and editors desperately trying to find a Superman that works but not determined enough to fight for it. They build a mythology and wreck it before it even finds a solid footing. The most recent example in my mind is Grant Morrison's Action Comics. It didn't even stick to the next writer! Lobdell, Diggle, Snyder all writing a completely different Superman, from Snyder's Pre-52ish Superman to Diggle's silent guardian to Lobdell's complete jerk. Off course all writers can't write the same but at least the characters and their universe should feel consistent if they are part of a mutual continuity.
No time for the character, to build his fanbase, expand his universe and create a familiar environment around him. New 52 Supes doesn't even have a stable supporting cast and we are two years in! Let's compare some franchises shall we, the exact opposite of the Superman franchise, Batman. With twenty years of continuity on his back and still feeling fresher than ever. Yeah he had his ups and downs but that didn't stop DC from sticking to the magnificent lore, the familiar diverse cast, with a past behind it open to the reader so they can invest on it.

One thing that ease my mind is that Geoff Johns may be planning for a long run, which would at least create a stable status quo.