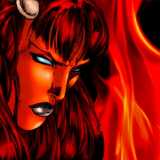 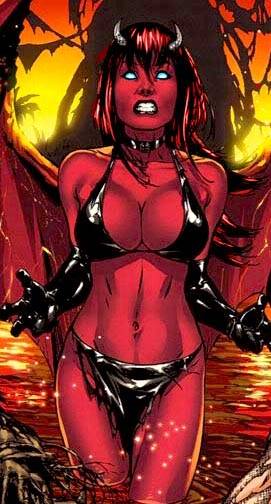 Tabitha was killed at age seventeen decades ago. Her soul was sent to hell until she was discovered by the minor succubus known as Incendia. Incendia used the forges of hell to reform the girl's powerful mutant body to use as a vessel for her essence in the mortal plane. Tabitha was brought back, her soul returned to her renewed corpse, her body shared by Incendia who shares control with her. Incendia often controls Tabitha's body at night while she allows the young woman to live her life during the day. Incendia however has the superior control. Tabitha still goes by her childhood nickname of Spine (for her hair and nails resembling pointed spines). Due to her trauma, her mind has reverted to an almost child-like state. Given the nature of her mutant skin, Spine does not age as quickly as most people.

Incendia is a succubus which means she is a minor demoness who seduces mortals. This is usually done in the pursuit of personal pleasure rather than some greater cause. She prefers targeting married men to destroy their families. Sometimes she kills or maims her victims. She is only able to physically interact with people while possessing Spine's body. Incendia likes to keep Spine in a mentally dependent state and often influences her mind. She is always able to communicate with Spine, even when she is not controlling her body. Despite her manipulative nature over and abuse of the woman, Incendia has a kind of love for her and is very possessive and protective of her. Incendia used Spine's body to give birth to a pyrokinetic child named Hellbender whom she raised with Spine.

Exoskeleton Spine's mutation is red, ultra-dense skin that functions like an exoskeleton. Her molecular structure is so solid that she is not only nearly invulnerable to outside harm and surprisingly heavy but also able to lift or hold heavy loads roughly 100 tons depending on the dispersal (balance is still an issue). Her outer body is immune to extreme weather and temperature. Her claw-like fingers and spine-like hair are extensions of this outer shell but sharpened to an edge. These edges are sharp enough to cut through most material with ease. Denser materials require an amount of force behind the assault. When she is scared, her hair spikes up much like a porcupine or hedgehog offering a more dangerous defence than her usual armoured form.

After her body was reassembled by Incendia to be her biological vessel, Spine acquired an immunity to fire and heat damage as well as a set of wings of the same make as her skin. These grant her the ability to fly. Her horns are bony structures, an outgrowth of her skull and thus more easily breakable than the rest of her body. Her internal organs are similar to that of most humans or mutants though she shows resistance to illness and aging. Eyes Spine's eyes are one of her weak points of her ultra-dense form. They are roughly the equivalent of human eyes in softness, protected by her lids. Her tear ducts produce special tears that enhance her vision in darkness and prevent them from drying out. They also give her eyes a glowing appearance.

Incendia, when in control of Spine's body, is able to summon and manipulate hellfire. It functions similarly to regular fire except that it is more resistant to conventional extinguishing like water, chemical, or air. It does not need oxygen to burn. The resulting burns are more like decay than proper burns as they are a pure destruction of the affected item, not a chemical reaction and the flames do not produce a byproducts like water or smoke. Incendia is Spine's only defense against psionic attack or manipulation and is able to be exorcised back to hell or psychically assaulted.

BIOGRAPHYTabytha was a genetic experiment of her humanoid species as an attempt to avoid extinction. The spines on her head for which she got her name allow her to access the minds of others through telepathy. This allows her to read weaker minds and communicate non-verbally, the latter of which . Her hair is not just a growth of keratinous strands but active receptors that pick up on the subtle bio-electrical energy signals given off before movement. This gives her the appearance of having precognition in combat or at least making her seem to have startlingly fast reflexes.

Spine's laser swords can be adjusted for potency from a slight stun to slicing through dense metals. They can refract other laser assault while shielding. When injuring lifeforms, the blades automatically cauterize the wound. Each laser blade is emitted from a tonfa style hilt that gives her a unique fighting style from other sword fighters.

Age: Physically appears in her teens as Spine/early twenties as Scourge)