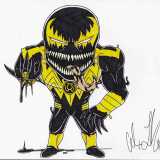 Gotham City 21 Genesis: Chapter #2~Scarecrow's Council (Work in progress, NOT FINISHED< NOT EVEN HALF FINISHED)

Scarecrow drummed his fingers as the minutes ticked by. Just before the clock has struck 11, his villains had assembled in the sanctum. Scarecrow smiled underneath his mask as he surveyed his team. If ever there was a squad capable of carrying out his mission for worldwide fear, it was this group. He had his basic heavy hitters in Parasite and Rhino. The heavier ones like Doomsday, Mephisto and the Anti-Monitor himself were under his constant mind control device, funded by Lex Luthor. As he turned to face the megalomaniac, Luthor looked down with a look of meekness and fear. No matter what Luthor might have said, it was clear who had the true power in this team. Other members included fearsome assassins like Sabretooth, Crossbones, Hank Henshaw and Metallo. And then there was his twisted love...Typhoid Mary. Apart from Luthor, Scarecrow's imperial partners included Dr Doom, Wilson Fisk and Blackheart. A few others had made his ranks, but these were his elite members.

"Fellow Regime members...There is no doubt that contrary to what you've been telling me...There are heroes out there. Emma Frost has confirmed that the one known as "Spider-Man" is not only alive, but has allied himself with 3 individuals formerly of..."More lenient" sets of morals."

Otto Octaviushad begun to sweat. Truth be told, he was one of the members who often times questioned allying themselves with a Regime so brutal. Contrary to the public image, there were villains on this team that didn't necessarily want to be here. They were just smart enough to know that nothing would stop Scarecrow. The man killed Batman for Christ's sake. And the next steps of his plan were ingenious in a...Savage sort of way. Knowing that the elimination of Spider-Man was his responsibility, he spoke up.

"Mr. Crane, Spider-Man's...Immaturity means that whatever team he has assembled probably won't be lasting very long, especially a team of former villains."

Crossbones rolled hie eyes. He had suspected from the beginning that Dr. Octopus didn't belong among the Regime, and his obvious sympathy towards Spider-Man only enforced that idea. "Otto, we're not talking about a kid here. We've managed to kill Batman, Hal Jordan, the Fantastic Four and even ol' Supes himself. The fact that he's still alive makes him a threat...And threats like him need a public execution."

Scarecrow laughed sinisterly, clapping to Crossbones comment. "Right you are Brock. Worse still, it has come to my attention that Grodd, Harley and Ivy aren't the only allies Spider-Man has consoled. My goons have been completely inept the past week, claiming to have been bested by costume wearing vigilantes. Even Doomsday wasn't able to take out Sinestro's new Corps. The solution? Draw them in like any dumb animal...Bait."

Scarecrow handed a green vile to a smiling Lex Luthor, as he walked up to his view of Metropolis. The air was filled with pollution, the unhappy citizens below lowering their head in fear that Scarecrow's spies or drones were watching them. "Luthor here has devised a most ingenious plan to draw in the heroes like flies...Inside this vile is a parasite mutagen. Infecting a highly populated area, and the heroes will have no choice but to come out and save their precious city. Try a hospital or something, they're bound to be drawn in."

Scarecrow snapped his fingers as his elite death squad stood up in a uniform pose. These men were known as the Crow's Gallery; a.k.a Crossbones, mind-controlled Doomsday, Metallo and Cyborg Superman.

"The whole business should be done with by tomorrow. Hroo Hraa!!!"

What Should I Do Next?

I am totally in a fan-fic writing mood, and I have a bunch of ideas on my mind. I really want to start something new, and guess what? You're gonna be voting! So yeah, basically comment below on what I should do next and why you want me to do it and so on and so forth. So...Comment away!

Basically, this crossover would be set in a dark, gloomy world where the merging of the DC/Marvel universes has resulted in the outlawing of vigilantism and the war between a cruel government system which has recruited villains to snuff out heroes and do their dirty work and a small revolution made up of heroes, reformed villains and anti-heroes. These are the characters

I actually have a few ideas for this.

Dorian Gray after studying the life of Lawrence Talbot develops a deep fascination and respect for him. Using dark magic, he resurrects him from the grave, and asks him and Gwen Conliffe to live with him in the estate in a life of luxury. The now cursed Mercutio and Jenny suspect that Dorian is not as charming as he appears to be, and try and investigate and stop Gray's devious plans, and both try to convince Lawrence and Gwen that they are on his side.

The Wolf-Man Meets The Mummy

The Egyptian traditionalist Mehemet Bell, an aristocrat whose childhood was filled with tragedy and horror, who feels like society must return back to the days when the Gods were feared and respected, resurrects The Mummy Kharis, a king who was poisoned by his jealous brother when he was only 17 (Whose now dead bride bared a shocking resemblance to Gwen Conliffe). Unfortunatley, the spell also resurrects Lawrence Talbot. Mercutio, who has grown distant and haunted, and whose marriage with Jenny is in jeopardy after he kills someone as The Wolf Man, is furious at Lawrence and seeks to kill him and The Mummy.

The Legend Of The Wolf-Man

This follows the story of Lawrence and Gwen's son Christian (Hayden Christensen). Gwen committed suicide long ago, and Christian was raised by Mercutio, who has become as cold and detached and depressed as Father John before him. Christian, a 30 year old mammal biologist, hears rumors of animal attacks and murders in Korea, joined by his step-father Mercutio. When he leaves, he passess out under the full moon, and awakens in the care of traditionalist Korean villagers. The village is led by strict traditionalist, lover of beauty and quite civilized man Hyo Hyun Shik (Takeshi Kitano). and falls in love with the fatherless outcast Kwon Ji-Yuan. (Son Ye-jin) The killings have caused a giant cloud of fear over the village, and things go from bad to worse when Christian starts to become a Wolf-Man at every full moon, participating in brutal killings and tearing the village apart.

This would basically be a story of what would happen if the Thing escaped. It makes it's way to Canada where a bunch of film students are making a documentary on the wildlife there...Big mistake, as this eventually leads to them encountering The Thing and thus begins a thrill ride of horrors.

In this universe, the Blair Witch Project documentary was actually a success and the trip went just fine. In 1999, 5 years after the events of the Blair Witch, Heather Donahue and her friends decide to create a follow up documentary on the Medeiros girl in Spain, who was rumored to have turned into a demonic monster. Heather decides to spend a 5 whole days in the Church where she was rumored to live. And that's where the shit really hits the fan. It would even take some scenes with direct inspiration from BWP and (REC) (You can bet your ass the infamous apology scene is gonna be there.)

Costume: An grey metallic, spike covered armor and a skull-like head with enormous, Angler Fish like teeth, surrounded by horns of spikes. He also carries a vicious looking red machete

Hair Color: Brown (No hair when he transforms into Doomhound)

Powers: Becomes stronger through the fear of his enemies, acrobatics, long chitin claws, super strength (Can lift up to 8 times his own weight), machete can completley evaporate enemies into dust

Bio: Brian Taylor grew up an incredibly intelligent young man, with a fascination for biology and botany. His mother died when he was a child, and he never knew his father. He was raised by his older sister. However, his older sister was in an abusive relationship with a boyfriend. One day, when Brian was 16, his sisters boyfriend almost killed her. That day, Brian Taylor was visited by the demon Bthodes, (Secretly his father) who made a deal with him that he would allow him to avenge his sister if he became the Doomhound. He accepted, and while in Doomhound form, killed his sisters boyfriend. After, Bthodes killed his sister. Horrified, he told the authorities his sister was killed by a demon. He spent the next year in an asylum, when the authorities thought he had suffered from delusions.

Blogs Created:
5 blogs
Most Commented blog:
What Should I Do Next?
Total Comments on blogs:
15 comments