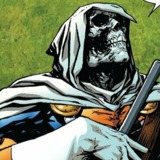 The World Does not Belong to You

An ongoing theory on both the dark web and mainstream forums is that we as a human species were the very thing that eradicated nearly all the dinosaurs, that the meteor that collided with the earth was in fact a pod that carried the very first in the line of homo sapiens. This theory has universally been panned and given the status as "hogwash"....by one single man. A man who could be considered the oldest living thing on the planet, a man who could conceivably be considered an alien, but his DNA was the very basis on what would become human...he calls himself Soran but his name was lost long ago to even himself. These are his own archives.

When Soran first landed on what would be known as earth, it was only himself and the lone slave woman who was meant for copulation and reproduction.