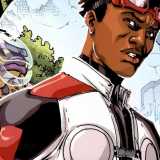 Who is Soothing Sounds

Joey was a kid that went through many changes in his entire life, started with ADHD, but ended up as perhaps one of the most chill people around. Started off angry and sad a lot of the time, and ended up almost freakishly optimistic and happy every day. As a kid, Joey's dad was a bit domestically violent to his mother and it influenced Joey in a very powerful way. But instead of growing up allowing himself to hurt women, it was the opposite, he grew up being able to never hurt a female, perhaps giving him his strongest weakness. As he grew up his goal became clear, somewhat. See Joey wanted to make an impact in life whether that would be becoming president or curing aids, he just wanted to do something. As he grew up he also learned one other important thing, what his favorite thing to keep him happy, music. So when he had the chance to visit the United Nations New Wave, a place that was supposed to unite some of the greatest brains on the planet, for some of the new advancements in science. Their first project was to create something that spread sound and music all over the planet at a press of a button, and he couldn't have been more excited. Sadly, when he got there, three things screwed him over. One he was a D*ckhead and decided to touch the machine, which was a small spherical item that was put into the center of protective barrier, so that it couldn't accidental hurt anyone. Two there were some D*ckhead scientist who came into work today and decided to blast the machine at full power. Three, just as Joey was gripping it with both hands, the scientist were were blasting the noise machine, and Joey wasn't a fast reactor. So when the thing blasted the sound, all Joey could see afterwards was darkness... until he woke up hospital bed that is. The doctors explained to him that Joey was lucky (via writing), a few bone fractures and sprains, and the handicap of deaf. The only thing that could have made Joey mad at this point in his life, was not being able to listen to music, and when Joey got mad, he got reaaaal mad. So after thrashing the place and leaving, he went to and try to listen to some music on a beach, sadly it didn't work. What did happen though, was Joey started to realize the vibrations going through his body and through to his hands, and with an instinct blasted the sound from his hands in an concentrated attack of sound. Joey then started comprehending many things, and decided to do two things. One learn from a teacher how to read lips, which took a decent amount of time. and two learn how to control his powers in a desolate place, and he learned a lot. By the end Joey knew one thing, that with these powers he was going to finally make an impact in this world.

Who is Joey Gooding

Joey is one real relaxed and happy dude, even after the accident. Oddly that doesn't make him one for all the happy things in life. For one, he doesn't believe in the thing called love, and as far as remembers never has, to him it seems to good to be true, like Santa Claus or something. He also doesn't fear death nor does he feel sympathetic to those who go through a quick and painless one, and actually believes pain physical and mental is a lot worse than death. He agree's with this philosophy so much that even though hurting a female is impossible for him, if has the chance and need to kill one painlessly he'll do it. Joey is quiet, but not really asocial, it's just he would rather relax than talk about anything if it's really not all that important. His biggest love after music is money, and for the right price would do almost anything. While his dream was to be rich or powerful, with his powers he now wishes to meet black bolt and get him to yell at him with full force.

Major Institute for the young and talented: Joey Obtained the ability of at least partial hearing from here, as well as an ipod. Specifically from the professor Night Lantern.

GodHood Fight a war against Dathron's assault, was dropped into Detroit.

(After the events of Godhood, Maestro was made)

A lot has changed since Soothing Sounds disappeared and the Maestro was created.

Joey is essentially the same person. A bit more serious when in battle, but besides that, Joey Gooding is still Joey Gooding.

Joey still has Sound Manipulation but he now has a ton more control over it, and has learned that sound can come from any body part of his.

New Sound Concentration: Joey can now push his sound concentration up to 12 times. the problem with putting up to his max is that it tires himself out rather quickly. And if he keeps it up for more than a second, then death is almost assured. Joey has also learned to control the range of his sound, and even knows how to manipulate the speed of it. Able to somehow push sound to *technically* Mach 5.

Sound Marble: Able to hold up to 4 in each hand. These little balls of sound (each literally the size of a marble) are able to be flinged from Joey, each one able to put a hole through an average man's chest, but not much more power than that.

Sound grenade: A much more powerful version of a Sound Marble. Concentrates those 8 marbles into 1 ball, and then focus's the power even higher, taking 5 seconds to charge, even making the sound waves visible. Able to destroy a small battlaion of average to peak humans. Easily able to put a large dent into high quality metal(even adamantium).

Sound Armor: Sound barrier that always surrounds him. When being naturally used it's capable of blocking bullets. When focusing on sound based attacks (Sound Waves, Sound Grenades, and Sound Marble's) it's still capable of blocking bullets, just o f lower caliber. When being used as an attack or focused on, It can go through High Quality Adamantium(if enough force is applied behind it)

Flight: With use of the Sound Armor, Joey can now fly through the sky, max speed of Mach 5. When focusing on the Sound Armor & using Flight, Joey becomes a very powerful Bullet capable of penetrating most Tank Armor and Aircraft. Though he can also use marbles and this technique, it's difficult to use perfectly in conjunction.

Hand to Hand: using his sound manipulation and training from Urbs and his crew, Joey became a great fighter. Able to easily react to bullets, he has combat speed up to Mach 3, continuously training to push himself to Mach 5 combat speed. When going all out, he also using sound marbles in conjunction with fighting to cause exploding punches, kicks, and even headbutts. He's also pretty agile, and uses sound to push his body in unimaginable positions.

Sonar & Anti Sonar Joey can both use his sound manipulation to pick up enemies from long distances and essentially while blind, and can also cancel out any sound that he makes on his own.

Mystic Mode: Geek, one of Urbs crew, created a weed unlike any other. The effects of it could put a normal man in the hospital on sick leave. But Because of Joey's HF, he's not only able to live through it but gets insane amounts of boost from it. Able to push himself to Mach 5 fighting, and gaining an even bigger increase in agility. he also has no limits to marbles and the pain caused from pushing himself to much. Allowing him to fight in conjunction with all his skills perfectly 9excluding the Grenade which takes time to charge). he also gains a new move called Bass. Able to create extremely high levels of sound pillars (10x the normal sound) anywhere and at anytime. There are weaknesses to Mystic Mode, one, after the high is gone, Joey is usually extremely weakened and can barely move. Two, it's hard for him to take anything serious, and this can leave both his opponent still standing while he lays weakened on the ground.

Joey only has one weakness now, women. The only time his unease for hurting women is gone is when there's something too important on the line that he can't afford to hold back or he's in Mystic Mode.