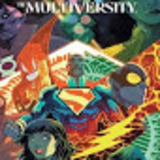 @sagathelegend: That’s I thought. It’s been so long that I had to make sure that was the case. The story Of Nix Uotan Was what confused me for a second. He is the Son Dax Novu/Mandrakk yet he also seems to be one of the monitors from Countdodn. Is he just Nil Monitor among others?

So would the Presence and it’s creation reside within what Sources dominion ? Especially with Morrison’s statement equating it to the Monitor mind.

If so, would Lucifer and his ilk play a similar role in a cosmic sense to the (True) New Gods and other pantheons since they both reside within the Godsphere? By true here, I mean Morrison’s interpretation of the New Gods in FC before the New 52. After FC and Final Crisis there essence seems to be split as evidenced by the New Gods of Kirbyworld and the New 52 Gods.

I’m going with Lex based on what little I’ve seen of him.

Tangent Superman and Quantum Superman give the Flashes problems

Not familiar at all with Captain Marvel (at least this version of him. Typically Scott doesn't operate on high tier at least without his god powers

Anyways here's the intro. (Yes I tagged myself)

Born and raised as an elite warlord on the Planet Khera, Majestic eventually found himself assigned to a backwater planet the natives call Earth during the Kherubim-Daemonite War. Spending centuries at war, he ended shaping much Earth's history after his arrival. From days in the Big Three where he fought the Daemonite-backed Axis powers, to his time with Team 1, and his tenure with the WildCATs, Majestic has always been a force for Khera and justice.

Majestic has often been described a Superman that never held back. This section will show you why....

The first feat that people tend to gravitate to when reading about Majestic is the fact that he once rearranged the solar system...

Above, he is shown pushing Mercury into Jupiter's Orbit,

Here he adds a tenth planet to the solar system by adjusting a comet's path, uses his heat vision to ignite a star ingot to serve as a stand-in for the sun, then he proceeds to split the sun in two using an advanced ritual and some secret equations...

Not only do these feats show Majestic strength as he able to move celestial to and fro without aid, but it also demonstrates his intelligence and ability to act upon as any mistake in the process would change the system irrevocably.

Likewise, he has shown have durability to match his strength. For instance, after chasing a starship across the cosmos he surviving plumetting into at superluminal speeds...

In his own words at the speed he was going a single dust mote would have the energy of a hundred Tunguska events. For reference, the event he is referring to had estimated yield at least a thousand times greater than the bomb drop at Hiroshima.

He has also survived being blown out of time as well. The blast which did so leveled Earth, the moon, and probably much more.

It is also worth noting that he doesn't tire... He proved as he maintained lightspeed for months without any substance whatsoever

While these feats show his physical prowess in its own right, his fights with other powerful beings will provide further insight into where he stands.

Namely, his fight with the Eradicator comes to mind...

Another example of his strength, was during his fight with Rampage who is stronger than Superman which I will post if necessary.

Just to keep things moving, his speed is another aspect that makes him well... Majestic.

To put things simply, Majestros has shown to be a react within nanoseconds as shown below

Rewrite billions of photons in the middle of battle as shown in his fight with the Eradicator earlier. (It also worth noting that this act gave the Eradicator what is essentially cosmic awareness).

Lastly, being the Kheran Warlord he is, his fighting prowess is unparalleled.

Hewre Majestros bests and disarms a sqaud of Coda Assasins in a blade battle. The closest analogue to these warriors would be the Amazons of the DC universe. There's much more where that came from but this should suffice for now.

But for all his power, Majestros recognizes that his most powerful asset is his mind...

Since I'll being going over his intelligence and how it applies in more detail in prep I'll just give you a general idea of how smart Majestic is... Contradicts the finest minds of the DCU... And was right.

And he was able to invent the molecular disentangler within seconds

There's some more stuff I could cover but this paint pretty good picture of who Majestic is powerwise.

For our perk selection, we have the following...

So just keep that in mind for the rest of the debate. It's also worth noting to someone that operates within nanoseconds, six hours is an eternity...

Genis And The Genius

According to tourney rules, we are allowed to prep anywhere as long as we are able to prove that our character has access to that place. So naturally, we will be prepping in Majestic's Rushmore Sanctuary where we have access to all of Majestic's tech.

First, this gives us access to Majestic's supercomputer which is able to accurately simulate the future as shown below....

The scans above show that the computer he has works on the quantum level in conjuction with computer from alternate earths to predict the future. In these scans, the computers analysis is able to accurate predict the arrival of the cosmic entity that Majestic had to rearrange the solar system to fool, and that Captain Atom's presence was going to lead to end of the Wildstorm Universe.

This combined with Genis' ability to look alternate realities and possible futures will almost certainly allow us to discern who you are, what you are capable of, how the fight will go, and how to counter you etc...

From here, Majestic go about gathering or building any equipment that will make achieving victory more efficient...

One of the most infamous weapons that Majestic can bring to battle are the Creation Blades which have been said to be able to cut through anything. In the past, they have allowed a street leveler (Nemesis) to cut through Majestic and in the hands of Majestic they were able to injure Tao, who had the power warp reality and essentially solo all of Wildstorm's Earth, to the point he could barely talk. Let alone stand or access his powers.

Next, Majestic will be bringing his exosuit from the Rushmore Sanctuary to help further tilt the battle in our favor. This exosuit was able to outright stomp Spartan who had previously been able to beat Majestic himself (albeit barely it was a pretty even match).

Additionally, Majestic has access to other pieces of tech like Nanoflauge suits that are essentially cloaks of invisibility. Kusar blades sharp enough to cut Majestic which he can bestow to Genis.

Additionally, Majestic can probably build more tech seeing as how invented a groundbreaking technology within seconds as shown earlier. But for this battle this should be enough to give us the advantage.

Just to the sum things up, Majestic will be using Quantum Supercomputer in conjuction with Genis' cosmic awareness to see how the battle will go and then will prepare for the battle based on what he has learned. For this battle, he has decided to bring the Creation Blades, the exo-suit, the Kusar Blades, among other things.

Genis will take care of masking our presence and preventing mind attacks if necessary in the meanwhile. After gathering the tech, Majestic will bestow Genis with the exosuit and the Kusar Blades. Doing so will allow him to strike with power that could probably stomp Majestic and that's without taking into account the Kusar Blades which could easily cut through people like Majestic before. Not saying that Genis will brawling here, just saying if someone decides to make him they'll have to deal with Genis' cosmic power along with his newfound strength. Majestic, however will be equiping his nanoflauge suit and will have the Creation Blades ready to strike at the right moment. Given that he also has Wolverine's healing factor he'll virtually impossible to take down physically and Genis will cover all of the other bases.

Essentially, Genis' only shortcoming has been covered and then some by prep and Majestic has been turned into the ultimate assasin given his speed, striking power (especially with the Creation Blades), his durability and healing factor among his various other powers.

Next post will be focusing more so on how battle itself goes.