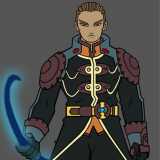 I wish Marvel would hire me to retcon re-write, and re-introduce Bishop in a mini-series....because......whew, sheesh, they blew it.

Mutants were the subjects researched enough to pose the question by the initial poster of the forum....but yeah it encompasses all of Marvel and DC

a perpetuation of the small minded approach....proven successful.....until minorities are numerous enough to outgrow they're given 'title'.

1)Billy Batson was given a scroll of prophecy that speaks of the great 7....empowered by Shazam and directed by the scroll....BB in his new transformed state goes and rounds up who he believes to be the prophesied about group. Using the wisdom of Solomon to decipher the traits of the individuals.

2) The rock of eternity is HQ

But when he was first introduced, he shot to the top of my favorite character list.

Batman should have postcognition to add to his deductive reasoning characteristics....like Dharma from Shadow Cabinet or even Longshot of the Mojoverse/Xmen

as for what powers he already has; the ability to trick people into thinking a baseline human could compete in combat with a whole host of metahumans...pfffft,,,stupid people

The short answer is Yes: power distribution and characterization is both stereotypically sexist and racist.

The reason, which is not a justification, is because the almost all characters are created by sexist racists, or at least minimaly educated, ignorant creators, that are writing to appeal to an audience with the same predilection. The Caucasian male. Though sophisticated stories exist and clever characterization can emerge, it is not a common occurrence. The strengths of the comics usually range in the areas the target audience is more versed or deem important.

Accurate cultrally diverse characters are a rare phenomenon.......but if you ask the majority of the 'target audience', things are a little too ethnic...at least that is the consensus I have compiled after decades of near ceaseless research....I will say the original Milestone universe 'Dakotaverse' was a breath of fresh air on this specific subject.

There are more obscure titles that are approached with cultural savvy.....and the remaain obscure, i'm deducing, because that doesn't appeal to the target audience. The same target audience who probably make up the bulk of this community comicvine...

so don't expect too much comraderie on these issues.

There is an anime Xmen cartoon on G4, pretty fresh..best art of any Xmen cartoon. But I liked Wolvie and the Xmen quite a bit too.