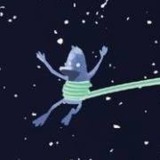 @bh6shouldhavehadsilversamurai: Her job is actually what is keeping her calm. By going back to her usual routine, she feels as if she can go back to her normal life. In fact most of the stress has happened outside of her office/work. Of course distractions can only last so long, so we shall see.

The series is good so far, sprinkle in a little Hellcat, even better!

Do you mean mantle? I ignored it in the previous post cause I thought it was a typo. As for them sucking? "Yeah, well, you know, that's just, like, your opinion, man."

Bingo, and that's bait. You know, even if Jennifer is on the cover, people can still get confused, for example.

Jennifer is a Hulk, so they are getting a Hulk book. If they want a specific Hulk then maybe they should do a bit of research and by research, I mean open the book up and read the synopsis page. It's not rocket science.

@sparty_dbq: I'm not sure it's fair to say that he can't carry his own book, since he is out of his element (gun...ha). He's stuck on earth, he can't very well do any Star-Lording, so it's better just to build relationships and play off of the other established Marvel heroes. It's not every day that he gets interact with them since he's always off planet. I mean the 1st issue did open up by showing that he only really has like 2 friends, his ex and a duck (named Howard I believe), so it makes sense that the rest of the series would be about making new friends.

didn't she die? When did she get revived?

She didn't die in Civil War II, she was put into a coma by a rogue missile shot by War Machine. The no prize answer to how a missile could do that to She-Hulk, is that it must have an ATM (Anti-Thanos Missile).

You dont think its stupid? Iron Man and Hulk are not mentals, they are Tony Stark and Bruce Banner, end of the story.

I don't see what's so stupid about it, this sorta of thing has been happening for decades. They have replaced Superman, Batman, Spider-Man, Green Lantern, Flash, Ant-Man, Ghost Rider, Captain Marvel, Captain America, Spider-Woman, Daredevil, Power Man, and Iron Man. Sometimes these characters keep the name and other times it's temporary, but this sort of thing is pretty common place.

It's also weird that you took offense to these books, cause Riri and Jen aren't calling themselves Iron Man and Hulk. In universe Riri is Iron Heart and Jennifer Walters is just being called Jennifer Walter, these just happen to be the names of the series for marketing purposes and because they still sort of relate. Iron Man still has Tony Stark as prominent character, and Hulk has Jen holding back from raging for the killing of her cousin Bruce Banner.

Did I do it right?

Why is the series named Hulk and not She Hulk? To bait the fans?

To bait the fans into what? The cover has She-Hulk in it and if you look inside there more She-Hulk. It's called Hulk for both marketing purposes and because Jen is actually a lot more like a traditional Hulk.

The first issue was actually pretty good, and I think you will find the most people that actually read that issue, also found it intriguing, so I eagerly await the next issue.

How is this a thing. Superman and Superboy should kill these two before they even realized it.

Hopefully I feel the same way, the 2nd arc was kind of a letdown. It started well but it went on for too many issues.

Yeah I agree 100%, it's an arc that could have been done in two issues. I read this issue already, and I can safely say that it moves the plot along, while revealing Marc's past. It's a much more satisfying read than that middle arc.