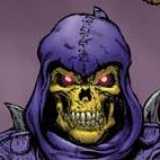 I've just absolved my PSU to determine the later career and life lines... strangely my teachers prophecized a weak result... (also according to my 1st half of the year report card that was messed up with grades of E's and D's because i was in hospital treatment for over 2 months due to my back operation.) Well there were 4 categories with 800 questions and it went over 6 hours with a personal speech with the second in chef at the Working agency. Now i have got 2 denies from FOS's (you could call it a german college) because of those nice grades that were given to me... Well this test was one of the last opportunities (if not the only one, just for the sake that one of the FOS's denied me for the fact that i'm in a wheelchair right now...)

The Resulsts in the 4 tests where Overqualified in all categories, even compared to people that visit the university. Now at least one of the FOS's HAS to take me ;D

And heres the part where i say...

Death mantle - The Horseman of Death is embodied with a death mantle (it lets any life form without willpower die ;Example: Trees, Flowers, grass etc.) with a touch.

In addition, the bearer of the Death Mantle can drain the life force (making him slowly weaker and unconscious) of the opponent with a constant beam, if the foe is heavily injured, KO or unaware of the Horseman's presence.

The Beam can be stopped if the user is Interrupted in any way.

Berserker Mode - Can enhance strength, speed and durability with rage and anger (It lasts for over 20 minutes, if you exceed that amount you start to get weaker).

Intoxication - The horseman of Pestilence is able to infect his opponent by using his weapon of choice that he sheathed in a self made poison. (the venom causes the foe to "slowly" lose his senses and awareness.)

The effect wares off if damage is dealt to the poisoned and if he is not KO'ed or killed after slowly coming to his senses again.

In addition, his reflexes are proportional to his awareness

The Overload Of Evil