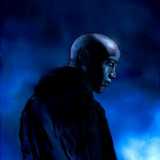 Great posts fellas. I hope this picks up.

The pounding of blood flushing through the veins in his head had finally subsided. The sunlight peaks through the dusty, grimy windowsill of an old abandoned shack; warming the pile of brains spilling from the crack of the doorway. Ozzie never got used to that scent; that horrible stench that crept its way into his nostrils and burned in his mind the person that was alive and kicking only hours ago. His bald head rests against the scratched surface of the old door, tears swelling in the corners of his eyes and rolling down his cheeks.

Ozzie lies on his back, cranking the heavy wrench in his hand clockwise, the tune of Marvin Gaye's "Ain't No Mountain High Enough" soothing his soul. The thump over heavy leather boots approach from his left.

"Oz...Ozzie...Osborne!!", the man yells kicking over the toolbox; a loud clanking echoing through the shop as the tools spill onto the grease covered concrete.

He unplugs the earbud and rolls from underneath the vehicle." What hell is it Owen?! What?"

"You almost done under there, this place aint the most secure ya know...how much longer you think it'll be tip' Scoop gets back?", his brothers asks while fidgeting with the the nub on his left arm where a forearm would usually continue.

Ozzie rolls out and wipes the grease and sweat from his brow, tucking the rag back into the pocket of his uniform. "Scoop knows how to handle himself Owe. I'm sure he'll be back soon. Meanwhile, stay off my ass while I'm trying to work. I'm a mechanic, but I can only do so much here without making to much racket." He slides back under, resuming the melody and tinkering with the vehicle's underbelly. Across the room, a soft scarping catches Owen's ear. The door pushes open and a hush falls over him; a large walker uses his arms to navigate into the room with no lower body to speak of. The sunlight is blinding for a moment, then corrupted by the silhouettes of a heard of walkers.

His body seizes after seeing those eyes, those horrible, yellowish red eyes that once belonged to Scoop. Owen backs away, tripping over the tools and landing on several. A sudden gunshot sends one of the undead toppling onto Owen.Ozzie looks over and to his horror sees the horde over taking his brother. The chorus of the song blaring in his ears and his brother succumbs to the unforgiving bites; the flesh tearing from his bones.

He takes the rag from his pocket and wipes the blood from his face.

Sam shouts across the room, Sam enjoys making as big of an entrance as possible.

What are you having? Wanna buy me one?

Sam chuckles, and then takes a seat beside the stranger

Siphon senses the new energy levels enter the club. An extravagant fellow shout from across the room which makes Siphon cringe. The loud man sits beside him at the bar while the energy reaper gulps back another shot and soon after pours another."Why the hell would I do that? Just leave me in peace, I think we're both better off that way pal." He doesn't turn to look at the stranger, too focused on the mirrored wall behind the bar where he has a view of most of the room.

It had been a while since he'd ventured the blood and ash stained floors of the Loner's nightclub though he'd always considered himself to be as such. He pays no mind to the scene around him. His only concern was downing a bottle of who knows what, he had seen enough bloodshed in his day to know better than to become involved. "Gimme a bottle of the best stuff you've got", he says to the bartender balancing a small stream of electricity around his twiddling thumbs.

#5  Edited By Siphon
Peeks around
hey...team? Anybody?
11 years ago

LOL I'm a little rusty, but I'll get there

The sun begins to set on horizon, leaving the buildings in the distance a mere silhouette. The leaves dance in the autumn wind along with the litter spread throughout the children’s playground. Lamont stands behind a girl on the swing set pushing her at a steady pace, though the cool breeze works against him. “ Push me higher Montie”, she giggles ascending and descending; an angel in his eyes. “ I’m too tired. We should get home”, he murmurs as he sits on the swing beside her, noticing the street lights flicker on illuminating the deceptive roads of the ghetto. “Let’s stay for a little bit, I like hangin with you.” She grabs his soft, little hand and interlocks their fingers, staring deep into his eyes. “ I..I like hangin witchu you too Chelsey..”  Something wells inside his being and he leans forward. He approaches slowly and kisses her softly on the lips. As he does, he opens his eyes as they radiate with a light blue aura. He looks at her face turning sour as she begins to disintegrate into thin air. TSOOM! Without a word, she’s gone. Lamont twirls in horror, and everything seems to compress around him. “NOOOOOOOOOOOOO..”. A florescent beam launches into the sky as he wails in agony. A pillar of energy bursts through the atmosphere that can be seen miles away. Thus was the birth of Siphon.

Siphon stares into the eyes of one of the many heads of the Infinitive, an underground organization responsible for the assassination of all of his family members. It took all of his being to restrain himself as he attempts to gain information from the man. He had been tracking him for months, seeking not only revenge, but answers to the tradgedy committed.  “Itachi Ohura, one of the many generals in the crime organization known as the Infinitive. I’ve gotta say you’re pretty elusive, but today it ends. Tell me about the crime organization your involved with. What do you want with me?.” Across the dimly lit room at the end of a long steel table sits a man with eyes sunken into his wrinkled face with protruding jowls and a calm expression. Around the two lay the lifeless bodies of his personal lackies who attempted to halt Siphon’s intrusion. “ Heh...You believe your acquired knowledge scares me Mr. Quentin? Lamont Quentin, age 21, single male, 6’1’’ 220 pounds, energy manipulation, formerly of Tenth Magnitude, Bladed Angels, The Regulators. Constantly switching schools, killed an innocent girl, abandoned your family. I could continue this dick swinging contest all day. You’ll have to do better than this. You have no idea the powers you are dealing with. You just a scared child seeking a false sense of redemption by running around in a costume. You should go home while you can. Enjoy life while you have it boy”

His frustration builds. The lights whir and flicker. Siphon lets out a heavy sigh and recollects himself. “ You’ve obviously been keeping tabs on me. But your wrong about one thing Itachi..I didn’t abandon my family. You and your boys killed them. I WANT TO KNOW WHY” He springs up from his chair and walks toward the unusually confident gentleman. “See, that’s where your wrong. You did abandon you family. And blood demands blood.”  A tall figure enters the room and emerges from the shadows. Equipped with an impressive assortment of throwing knives, kevlar armor and an eerie mask , the person in front of him stopped Siphon dead in his tracks. “Who are you?!”

The man’s hand raises slowly and lifts away the mask. Horror wipes across his face as Siphon views the culprit’s face. Siphon is locked in disbelief and the new player uses this to his advantage. In a swift and precise movement, the man twirls around projecting the mask at Siphon’s head. The attack connects and he stumbles backward toward a window overlooking the San Francisco streets several stories below. “ It’s been too long .....brother.” The man whispers in a flustered Siphon’s ear after speeding across the room. With that the energy reaper is kicked out of the window and goes flying towards the depths below.

“That will only leave a scratch. I should go and finish him off.” the assassin implores. “No we can’t do that yet. We still need him in one piece to achieve our goals. Contact the other heads. They will want to know of our progress”, Itachi proclaims.

A hovercraft approaches the ledge of the broken window as the men walk off. “How deep in cover are these individuals?” Itachii” We have agents with positions within the U.S Government, Triads, Yakuza, the U.N, Parliament- wait why do you ask Ty?” Itachi takes his buckles in and the hatch closes followed by a pressurized hissing. “ I don’t like there to be secrets between me and my clients. It messes with my business.”

“ Haha your business? Being detached will keep you from spilling the beans if you’re caught. A risk that we won’t be taking Mr. Quentin. We’ve have been around for centuries. Assisted with the alliance with Ancient Egypt and Rome, appointed Popes who lead the templars, covered up the Black Dhalia mystery, shrouded truths about Area 51. No sense in getting sloppy now.”

“I was attached the moment you hired me. Lamont is my brother!” The hovercraft disappears as it climbs in altitude.

The shards of glass rain downward falling on the corpse of the Blue Harvester. His bloody fingers clench the concrete  and he pushes himself up. KABOOM!!!. The building explodes from the base upward and the area is quickly subdued in a cloud of fire and smoke. The Infinitive, a force that blinds it's victims with the light of the sun and hides in the shade. They're a league far too powerful for Siphon alone. But his new found blood lust wouldn't prevent him from finding them and bringing them to their knees. He would find them and his brother an eventually uncover this madness.

Haha nice. Just taking a break from packin up junk and working on my post. Moving back home from the dorms soon.